Behind The Shot: Olympic Afterglow 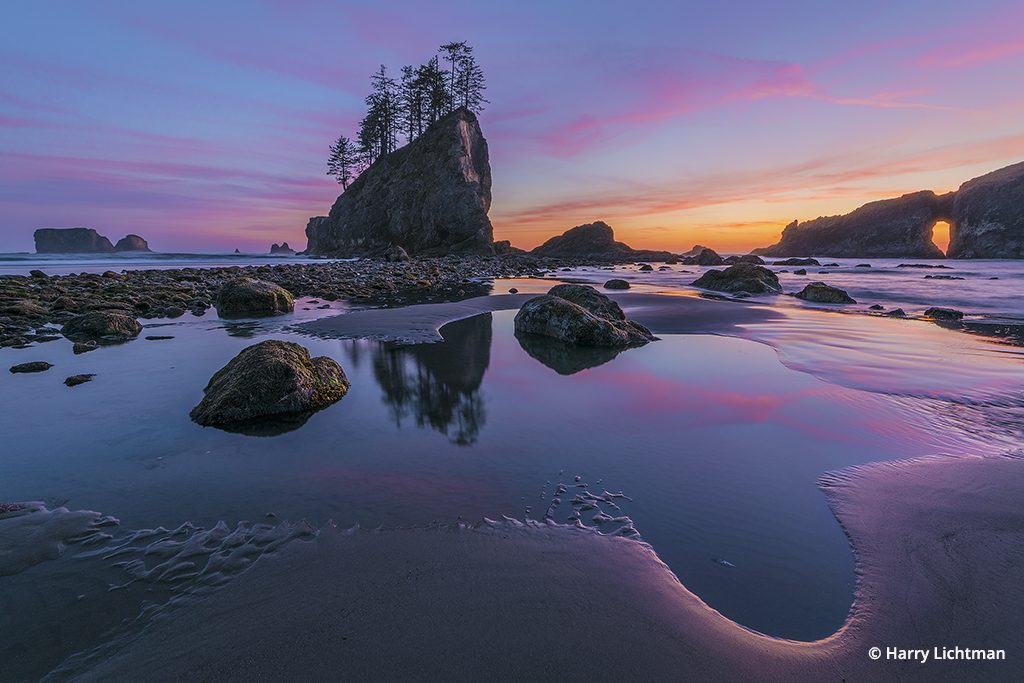 
Washington state is home to some of the most dramatic and accessible coastlines in the U.S. Second Beach, near the town of LaPush, is a gem of the National Park System and boasts sea stacks, arches, tidal pools and expansive areas of sandy Olympic coast. During a spring visit to Olympic National Park, Second Beach was high on my list due to such a concentration of natural features. Spruce trees growing atop rocky sea stacks were one of the most compelling attributes that enticed me to this beach. The spring sun sets in the direction of Quateata Arch, so the lighting possibilities were a bonus.

The forested walk to the beach is a gentle 0.7 miles, which can be an advantage as well as a detriment to successful photography. The short trail allows a quick response to weather conditions and lighting, often dreary and cloudy at the coast. Breaking fog can afford some of the most dramatic lighting. Easy beach access means that you’ll rarely be alone during sunrise or sunset light since many other photographers and visitors will want to experience this vista at that time. Camping with a backcountry permit is allowed on the beach, so the concentration of humanity can be a bit overwhelming during the peak summer months when the goal is to take landscape images without tourists cluttering the view.

My first of six visits to the beach proved to be the best. I arrived late in the afternoon to get an idea of compositional possibilities. Many photographers like to use Google Earth or similar apps to try and plan shoots, but I find there’s no substitute for on-site visits and a tide table to assess nuances in the topography. A receding tide was constantly revealing new details in the beach, such as reflecting pools and rocks, while creating access to shooting angles not possible during a higher tide. The wet sand left by the tide created brilliant reflecting surfaces for the sky as well as cleansing the beach of any footprints.

Sky contrails and footprints on sand can easily ruin pristine landscape images. By following the tide as it rushed out to sea, I was always working with a fresh palette. There was a photo workshop in close proximity, so I stayed close to the tide line to prevent other photographers from intruding into my wide-angle view. Some of the best lighting occurred after sunset, when clouds seemed to form out of nowhere and catch the pinks and purples during a post-sunset glow. Sand ripples and pools became more visible with the lower tide, so I stayed until most visible light was gone. I’ve learned over the years that it’s never over until it’s over, so waiting until darkness can create the most interesting images with longer exposures using today’s excellent camera sensors. OP

The post Behind The Shot: Olympic Afterglow appeared first on Outdoor Photographer.

Staff member
It is easily accessible, but on the other hand, the drive to La Push does a pretty good job of keeping out day trippers. It's a roughly 4 hour drive from Seattle or Tacoma. I say "roughly" since from Seattle you either take a ferry or take a long detour south to Tacoma. Both add delays to your trip.

It's worth a visit, but you'd like want to spend a couple of days there, since so much time is spent driving. That's going to make it tough to visit in the near future.
You must log in or register to reply here.
Share:
Facebook Twitter Reddit Pinterest Tumblr WhatsApp Email Link
Affiliate Disclosure: We may receive a commision from some of the links and ads shown on this website (Learn More Here)