Staff member
I'm not sure if I will get out today (rainy and cold), so here are more squirrel photos from Thursday. The previous photos were taken handheld with the 1DxII + 100-400L II telephoto zoom so as to get the rhodies in the background. These were taken with the 5DIII + 600L telephoto + 1.4x teleconverter mounted on a tripod.

No one gets tired of cute squirrel photos, right? 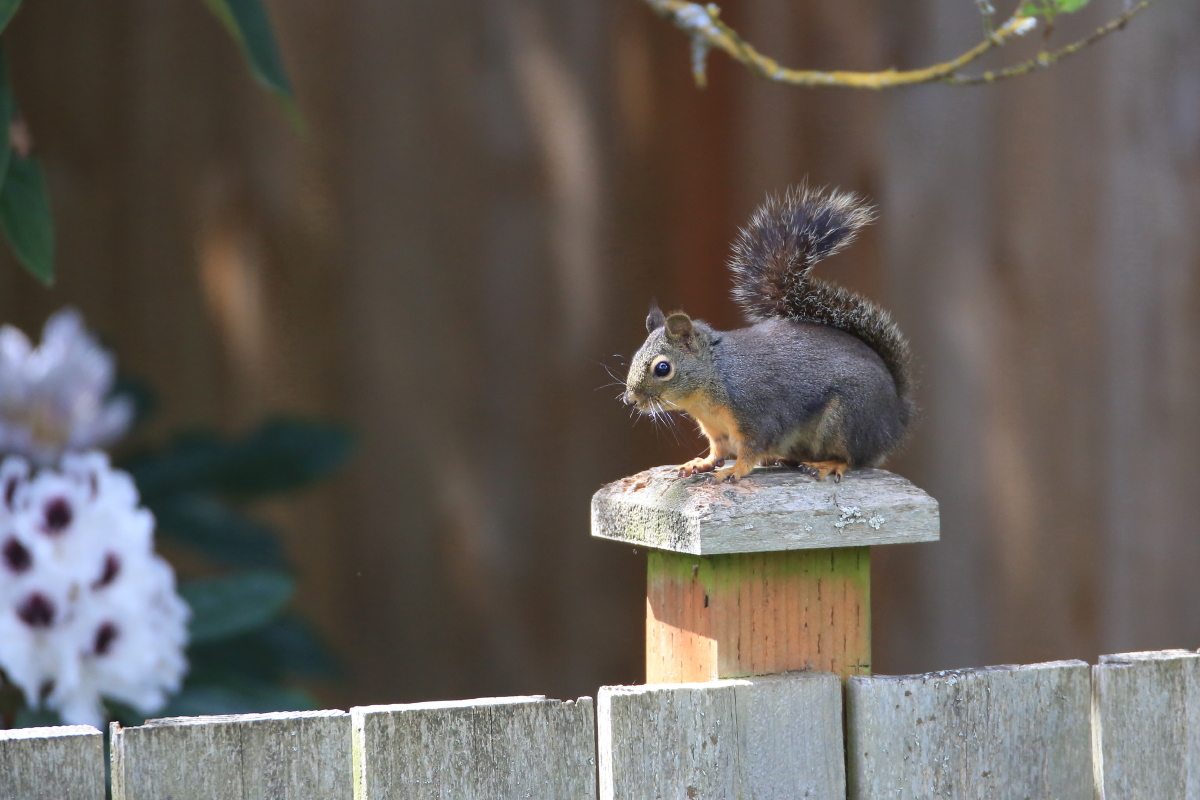 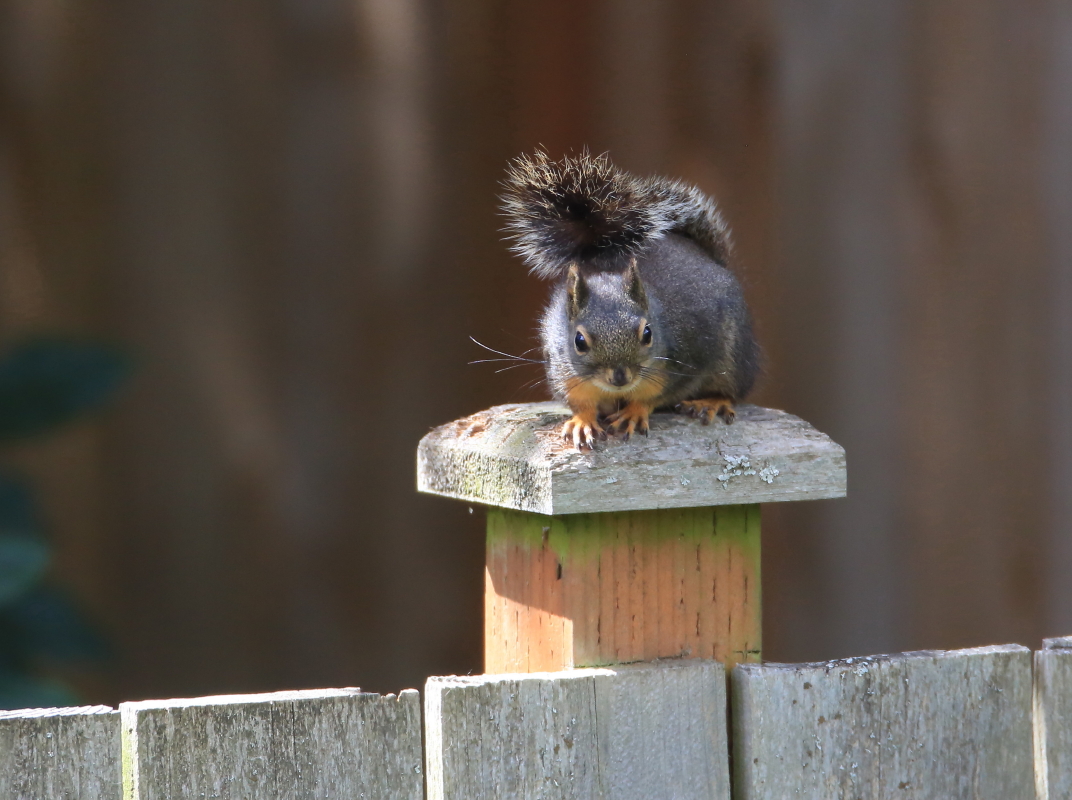 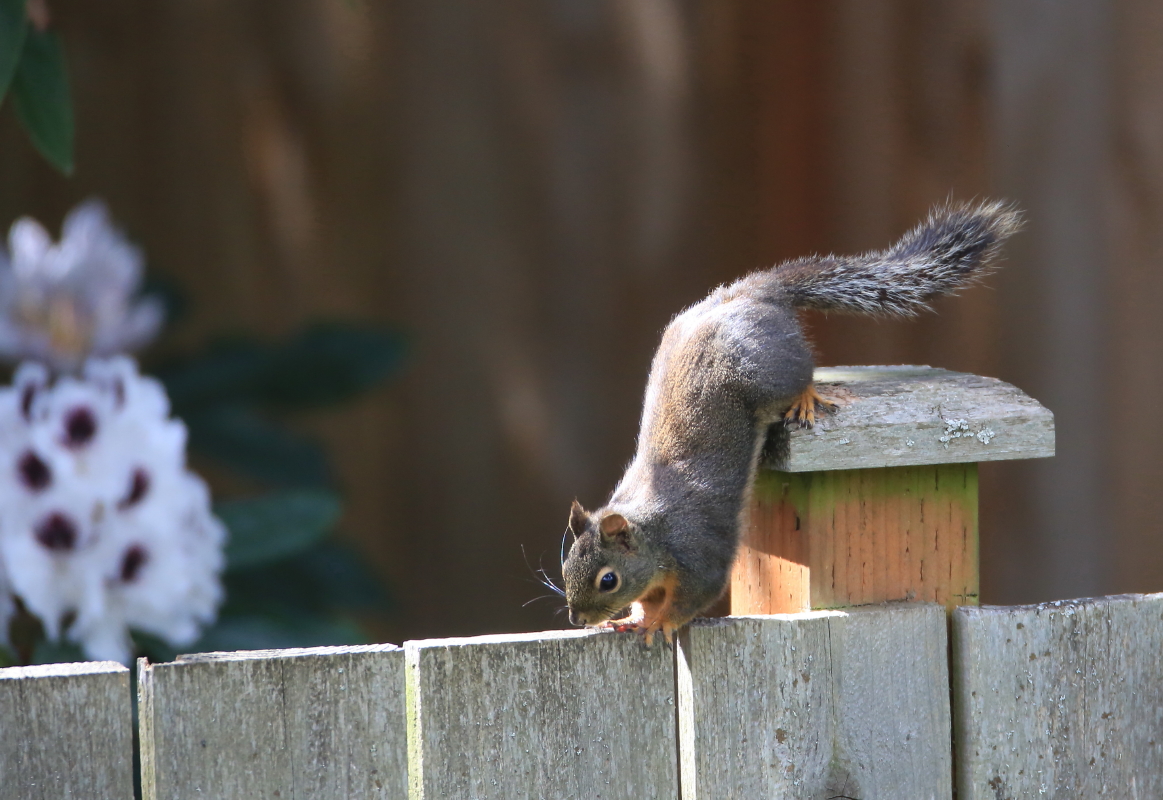 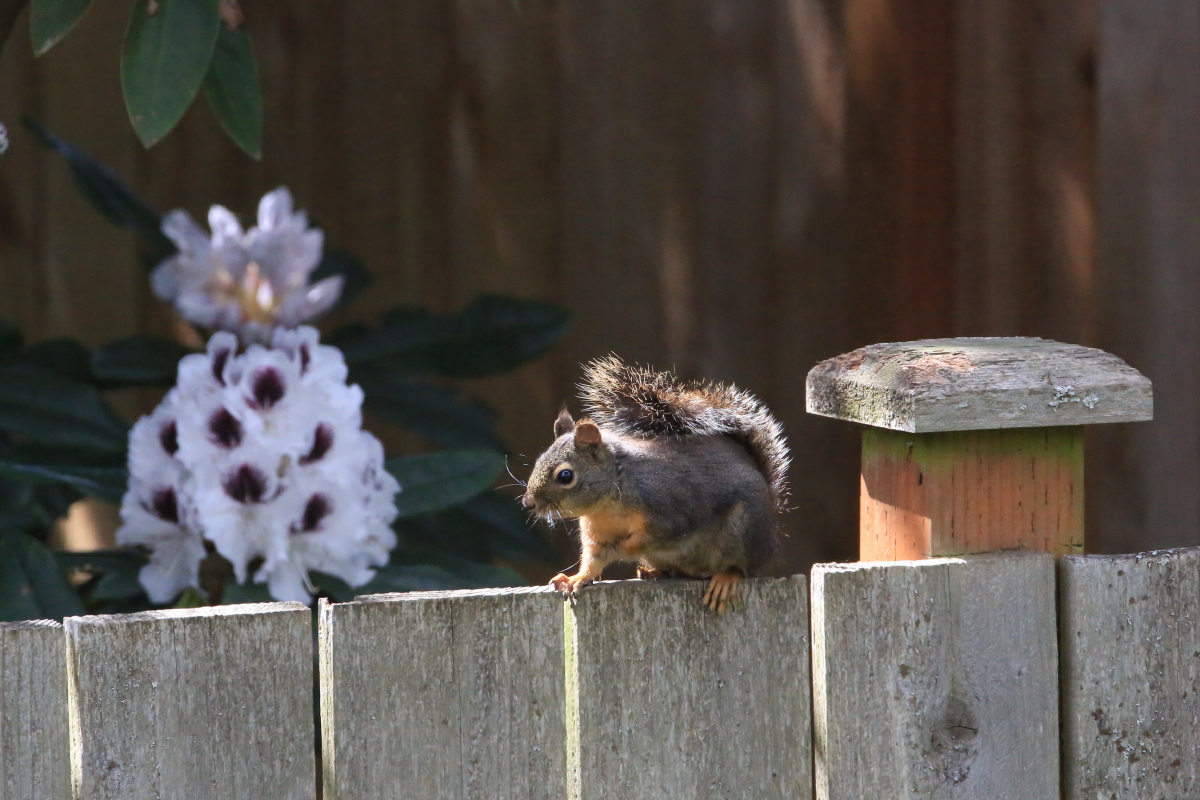 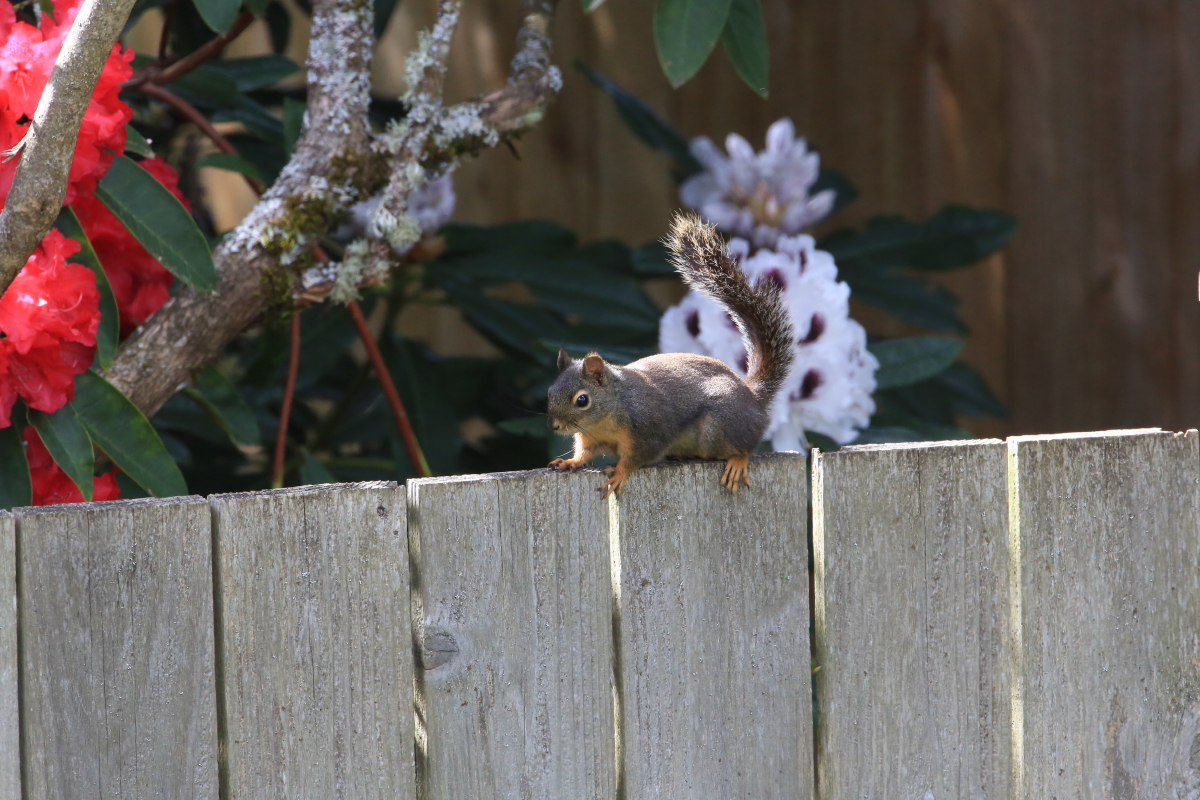 This morning (Saturday, 5-16-2020) I saw one of the Douglas' squirrels running along my neighbors' fence. I really hope they are establishing themselves in our neighborhood in spite of the presence of the eastern grays.

That was a fun post to follow Bill. I'll chime in on the mystery squirrel, I think it's a juvi Eastern Gray just based on the comparison of the Gray Squirrel face off on the fence with the Doug Squirrel. The common color band in the tail of the two squirrels was the telltale clue. Those Doug Squirrels are cute little guys, that's for sure.

Myself, wife, and daughter have started a routine as well, going out to our small backyard daily and catching some sun and watching whos coming to the bird and hummingbird feeder. A couple of years ago we were lucky to have a Gray Squirrel show up, the first I've seen in the 14 years we have been here. We never give wildlife a chance to take hold because we have moved into four new homes since our arrival in the Sacramento area 34 years ago. Except for one, each neighborhood was new tract homes with no native trees around. By the time planted trees got large enough to support wildlife, we moved. The first neighborhood we moved into was in Eastern Roseville and was spotted with a number of mature oak trees. It was common to see Yellow-Billed Magpies and it wasn't until we moved to a non-oak tree area did we find out Magpies hang out where oak trees are. I haven't seen a magpie since. Maybe that's good because they are known to go after nestlings and eggs.

Our bird feeder was becoming quite popular, the gray squirrel that showed up we nicknamed "Rocky" and he was a source of entertainment for about a month when he suddenly disappeared. I don't know but I suspect he was either chased off or even killed by a rogue cat that I caught a couple of times stalking him. I have taught my two cats not to venture into the backyard and have never had a problem with them harassing the bird feeder. Anyway, we had a flock of about 30 yet unknown birds that called the area around our house their home. They would spend most days hanging out in an ornamental Photinia bush I shaped in the front yard. It was thick and about 7' tall and provided great protection against predators. Sometimes en masse, they would take off and fly down our side yard and land in a neighbor's very large fast-growing tree the original owner planted in 06. The birds used the tree as a staging area to check out the surroundings around the feeder to make sure it was safe before descending down to it. Anyway, the neighbor made the common dumb move of placing it 3' from our side yard fence, and over the years it grew like a weed and attacked our concrete patio with its invasive root structure and overhanging branches. I spent a lot of time chopping new roots and cutting back intruding branches, but not enough to stop our patio from getting damaged by the roots. I also noted the roots were destroying his artificial grass in his backyard and I brought this to his attention. He indicated he was going to sell his house and put in the contract to have the tree removed, that was a relief. However, the new owner moved in and I learned the seller never mentioned the tree in the sales contract. At least she agreed with me the tree was a menace, I even offered to pay for part of its removal, but she declined the offer. She took her time to get it done, but about six months later a crew showed up and the tree was taken down.

I was happy it was gone for another reason. It no longer blocked my view of the northern skies since as you know one of my hobbies is deep-sky astrophotography. I could now frame targets earlier and stay on them longer without having to work around the tree, it really curtailed what I needed to pursue targets in that important part of the sky. However, the removal had a negative effect on the aforementioned flock of birds, they up and went away. It's been six months and they have not returned and for a few months, we had few visitors to the previously active feeder. Over time other small birds started visiting, one bird, which I believe is a House Finch returned to the feeder, but only a mating pair. Eventually, their friends joined up as well along with previous visitors like Mourning Doves, Red Wing Blackbirds, and an occasional Jay. The re-population of the feeder took over a month or more. Missing were two or three other species, one had a unique black and white striped pattern on the top of its head and another was mostly yellow chested. The larger flock of unknown birds have yet to return, but I think I saw one at the feeder the other day. The removal of the large tree was bittersweet, glad it's gone, but it made a big impact on birdlife in the backyard.

Staff member
Some of the birds you see may be migrants. It is always hit or miss whether they will stop at your feeder from one year to the next. You need to pull the plug on that 500L telephoto you were telling me about and set it up to photograph birds at the feeder.

Staff member
This afternoon (Thursday, 5-21-2020) I caught a rabbit in my backyard neighbors' backyard. All photos were taken hand held with the 1DxII + 100-400L II telephoto zoom.
Look closely and you can see why a rabbit may be quite literally able to see out the back of its head, a good survival technique. 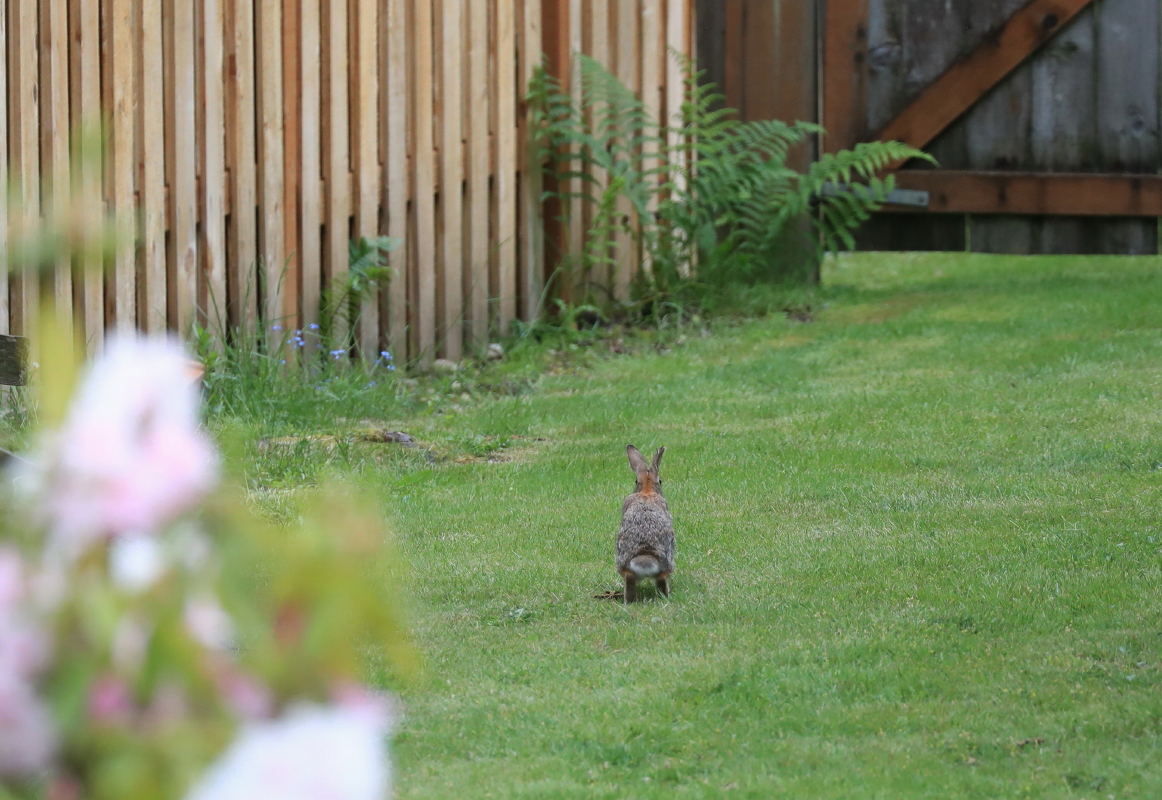 Checking around in a more conventional way using its eyes and nose. 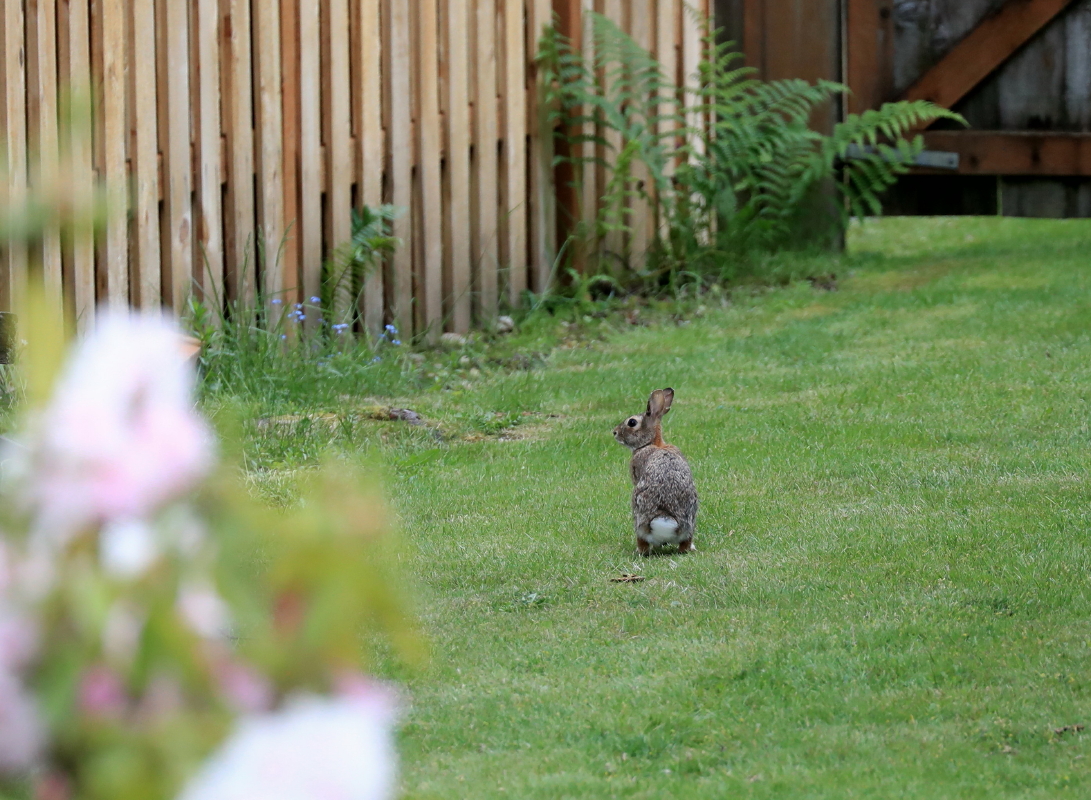 Update. Later that evening my wife and son found two rabbits in the front yard when they returned from their walk. It was getting dark and the auto ISO settings varied among 4000, 5000, and 6400 even though I was shooting at 1/250 and f/5.6, the maximum aperture opening of the telephoto zoom.

Rabbit #1 is on the left side of the photo on my next door neighbor's yard near their drive way. Rabbit #2 is on the right side. 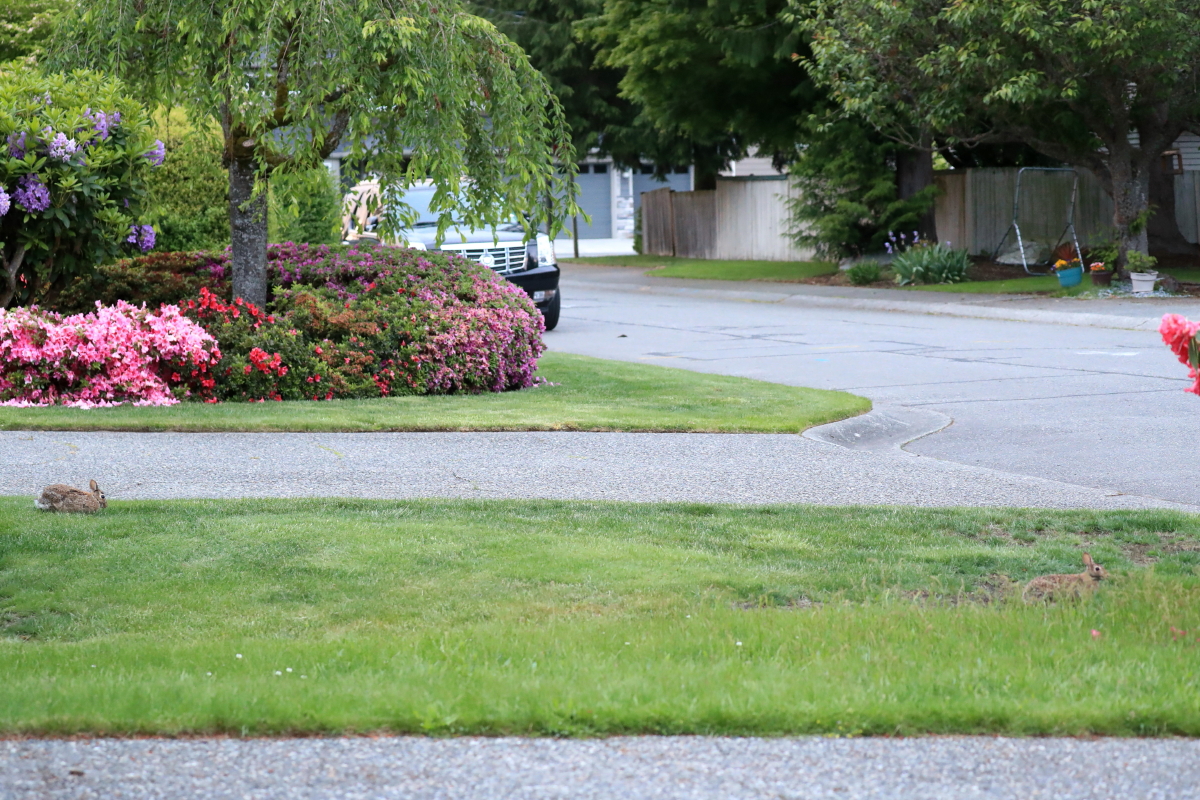 I wanted to get photos of rabbit #2 near the rhododendron bush at the end of my driveway. Many of the rhodie blooms are past their prime. 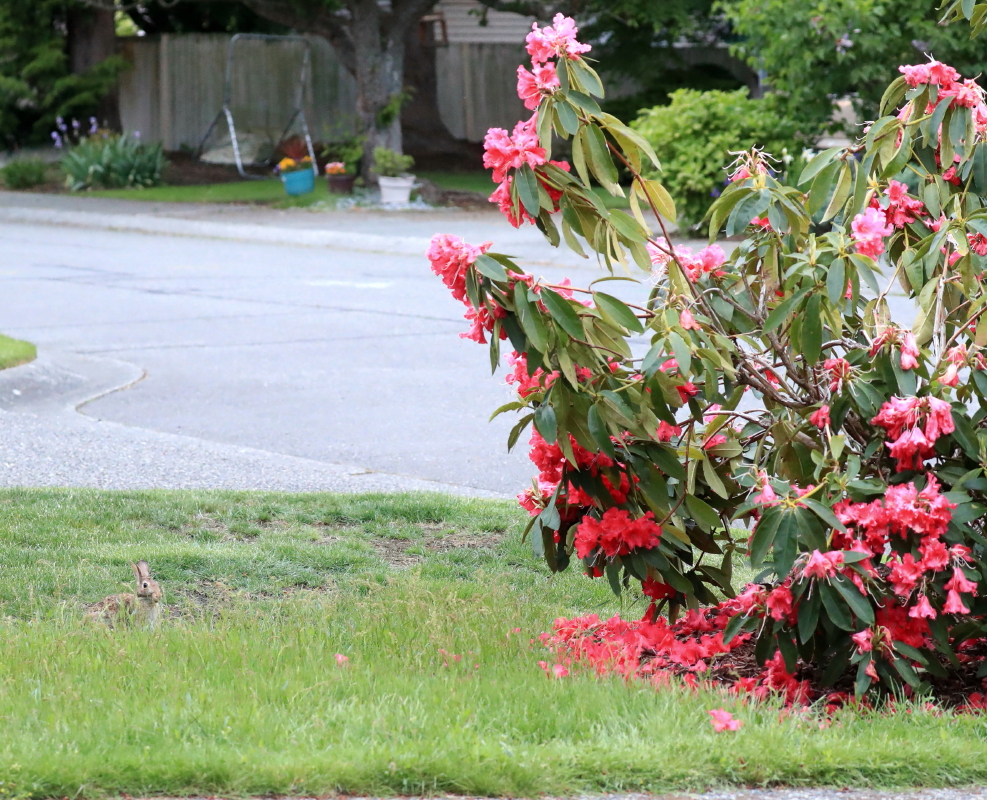 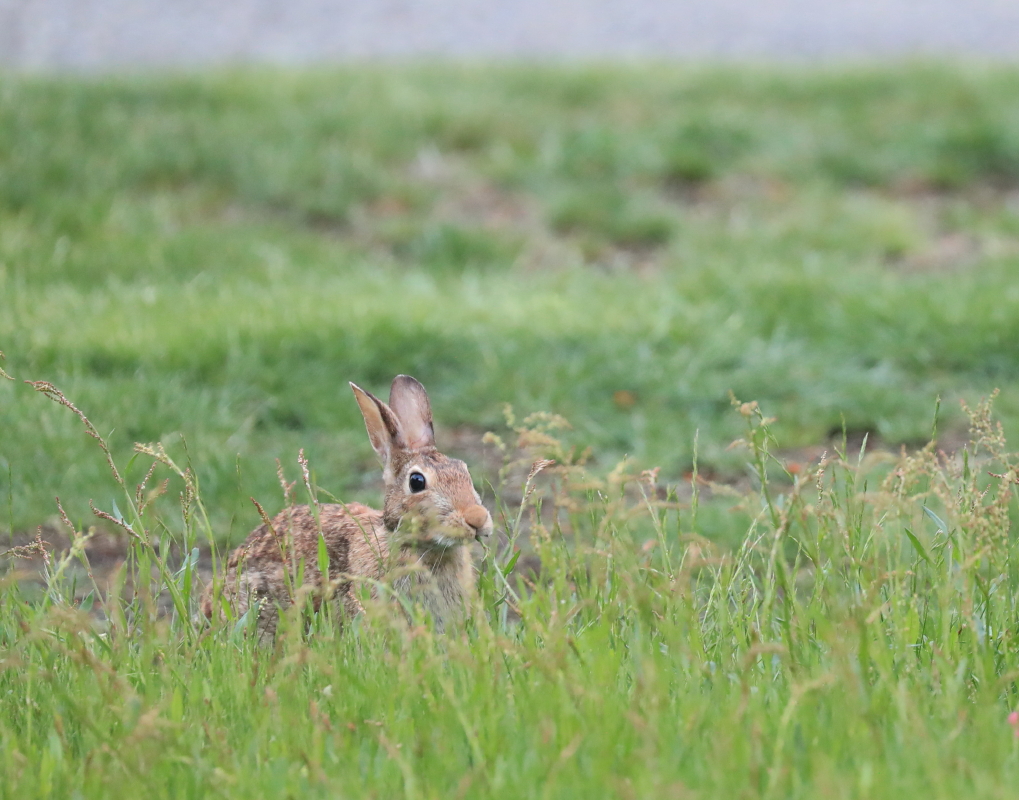 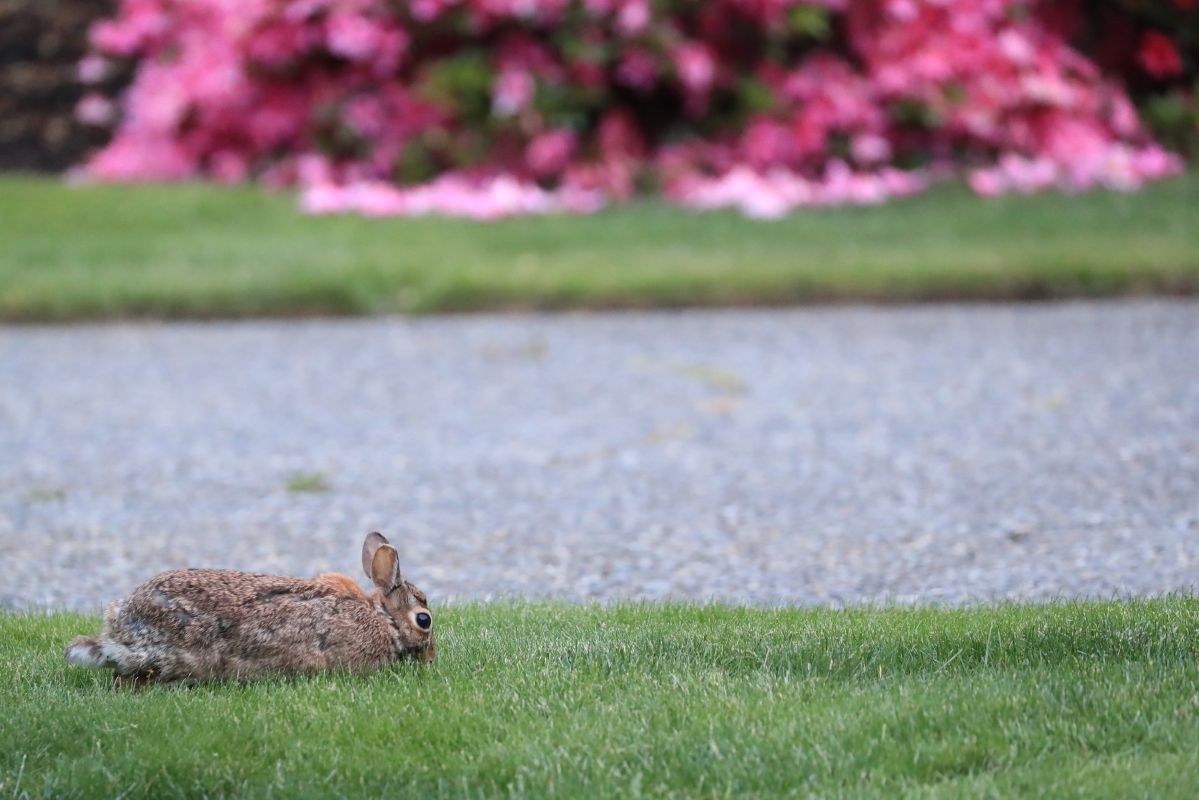 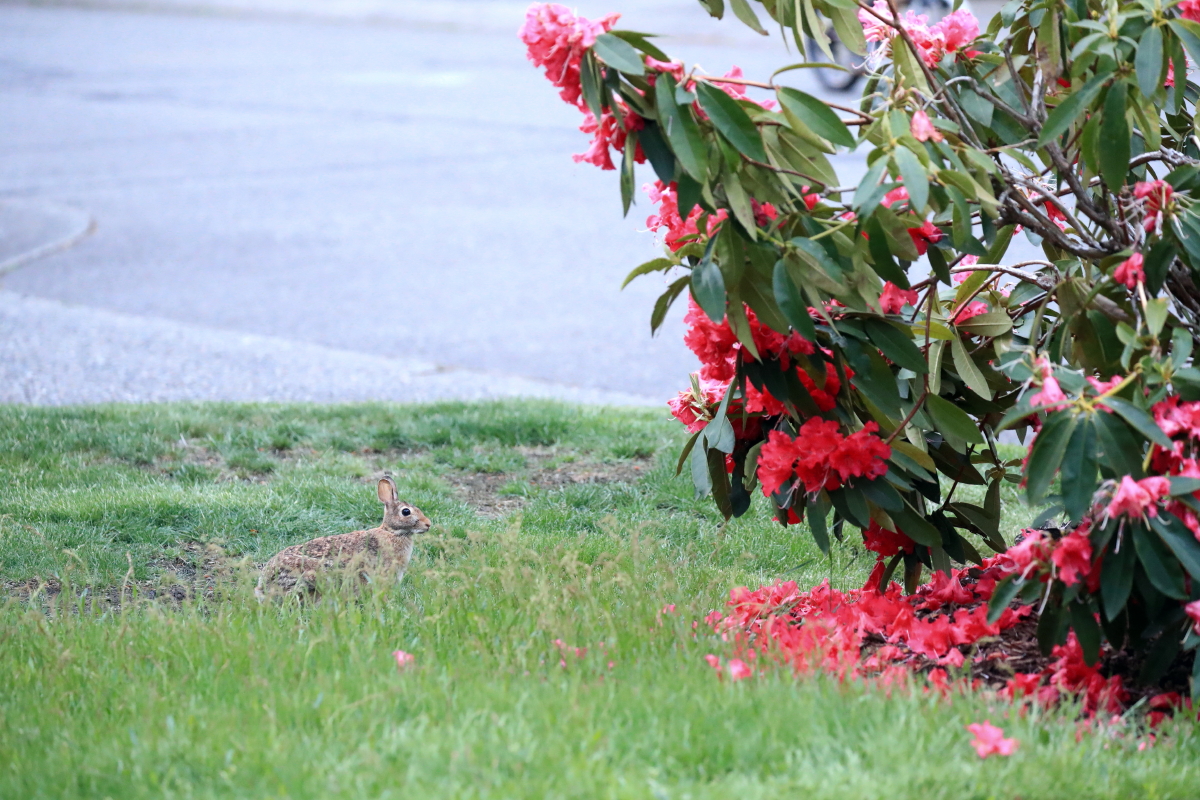 Neighbor kids scared rabbit #2, which ran across my neighbor's driveway. 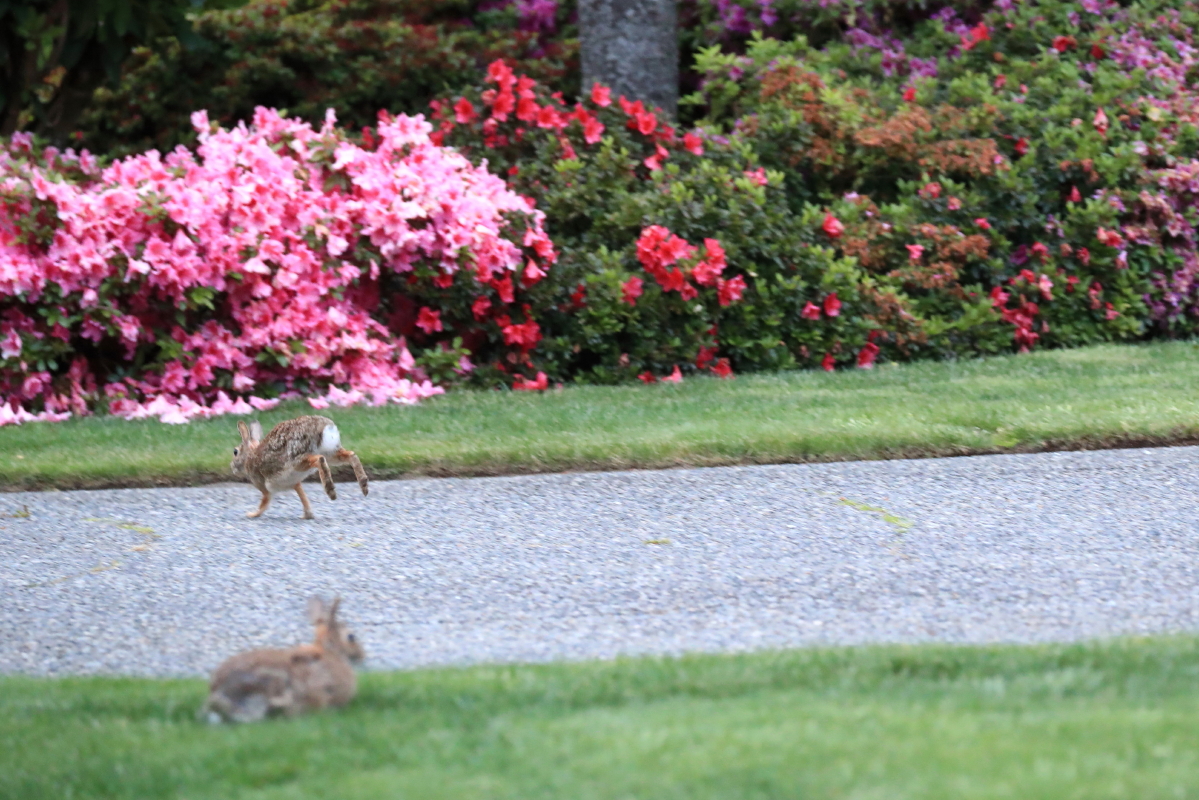 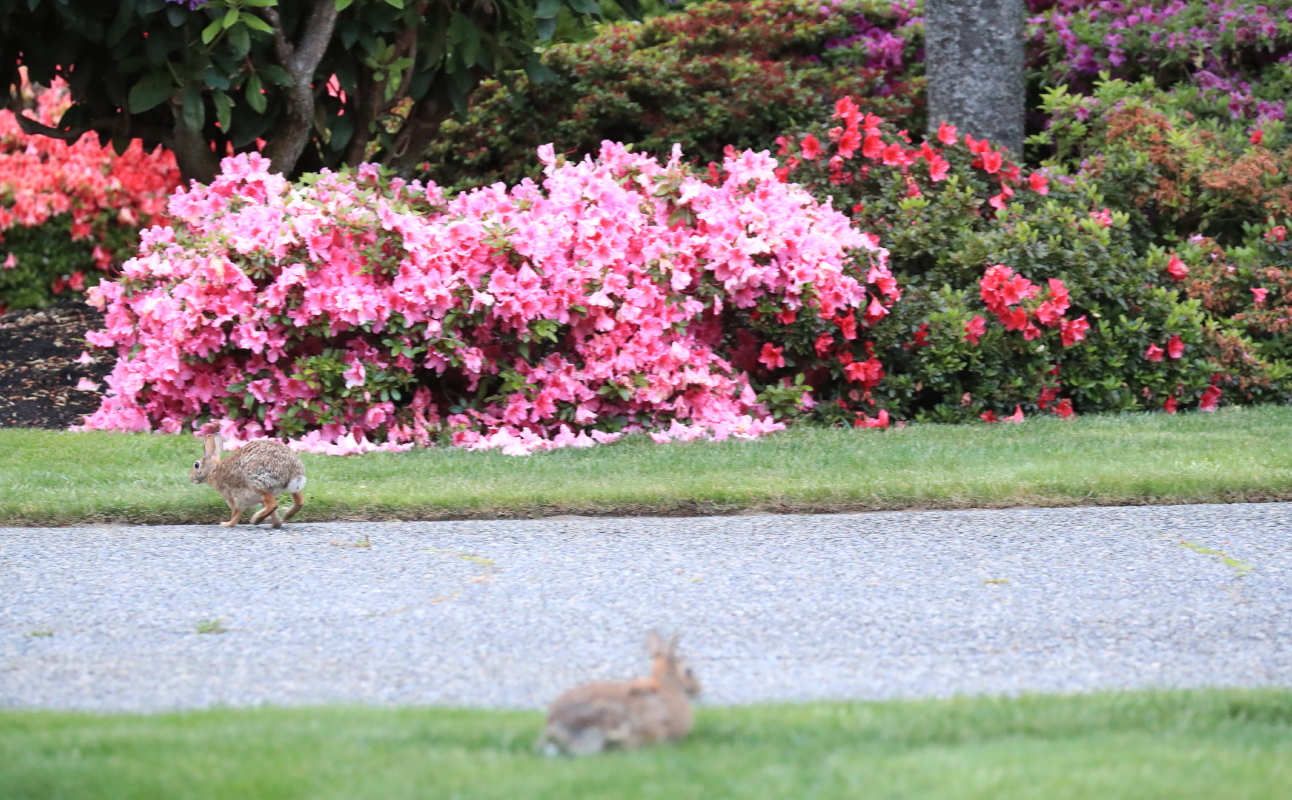 Rabbit #1 stayed in place for a short while, but eventually took off as well. 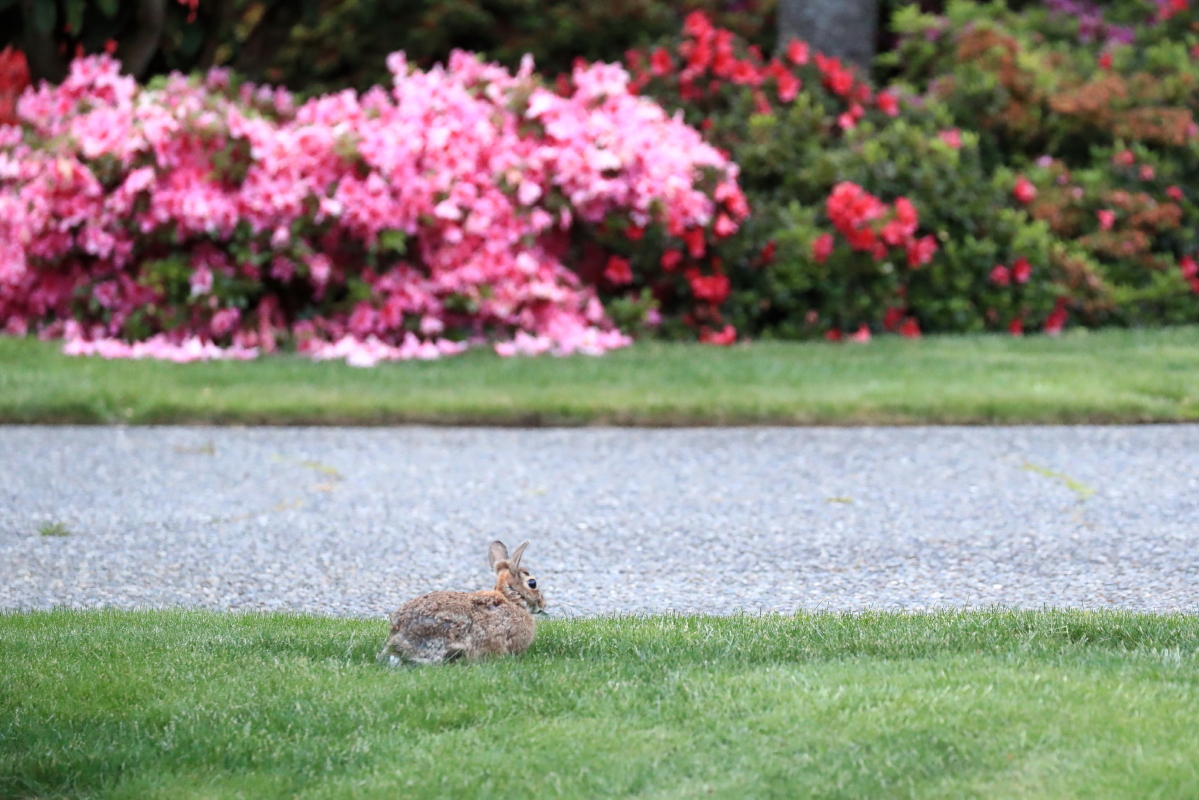 The rabbits certainly are at the mercy of the raptors. Our quail got wiped out a few years ago by them. Everyone has to eat.

Terry O said:
The rabbits certainly are at the mercy of the raptors. Our quail got wiped out a few years ago by them. Everyone has to eat.
Click to expand...

The increase in rabbit population tells me our local coyotes are laying down on the job.

Staff member
Three eastern gray squirrels were chasing each other around my backyard Saturday morning (5-23-2020), but I saved my shots for one of our native Douglas's squirrels making its daily rounds. I am so glad they seem to be holding their own against the invasive eastern grays. 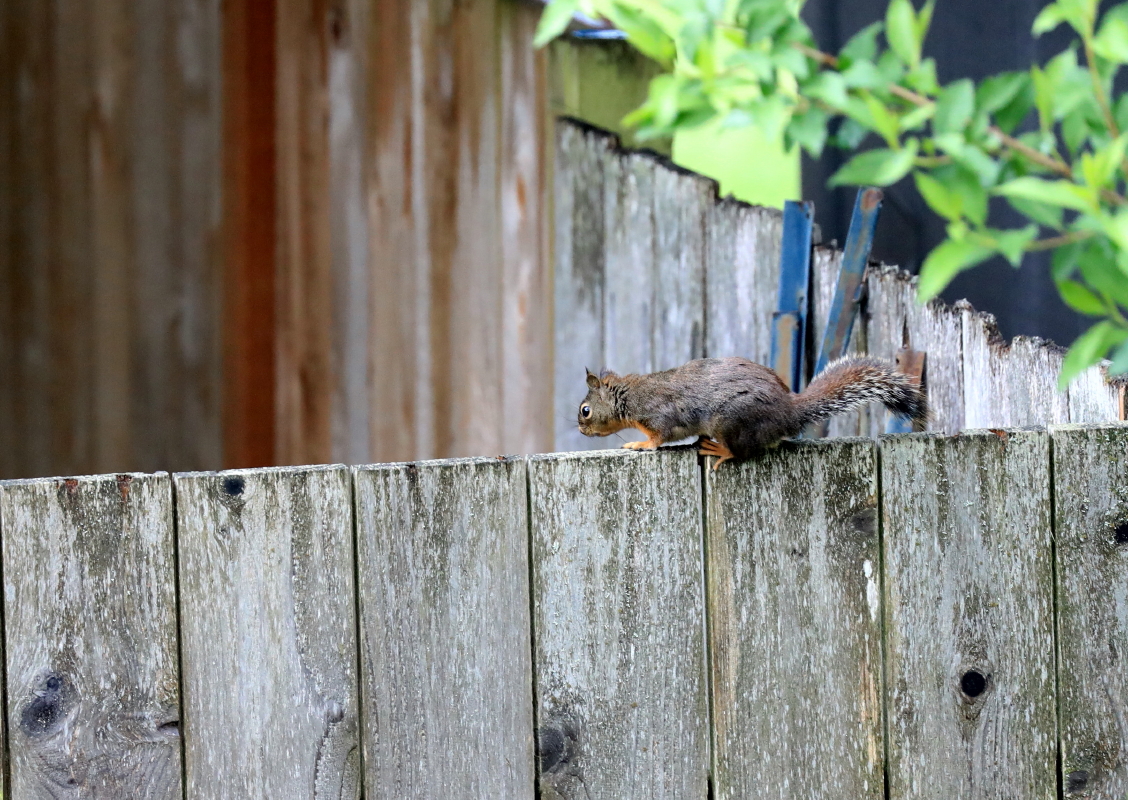 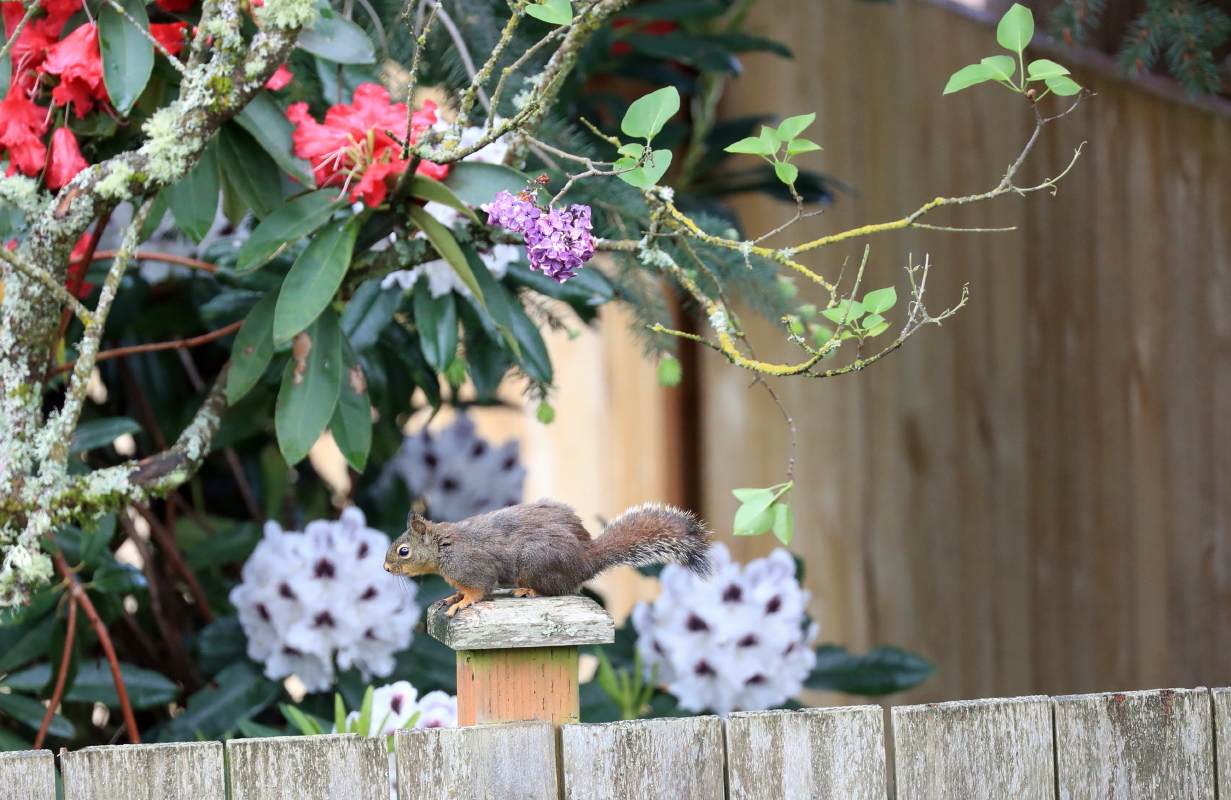 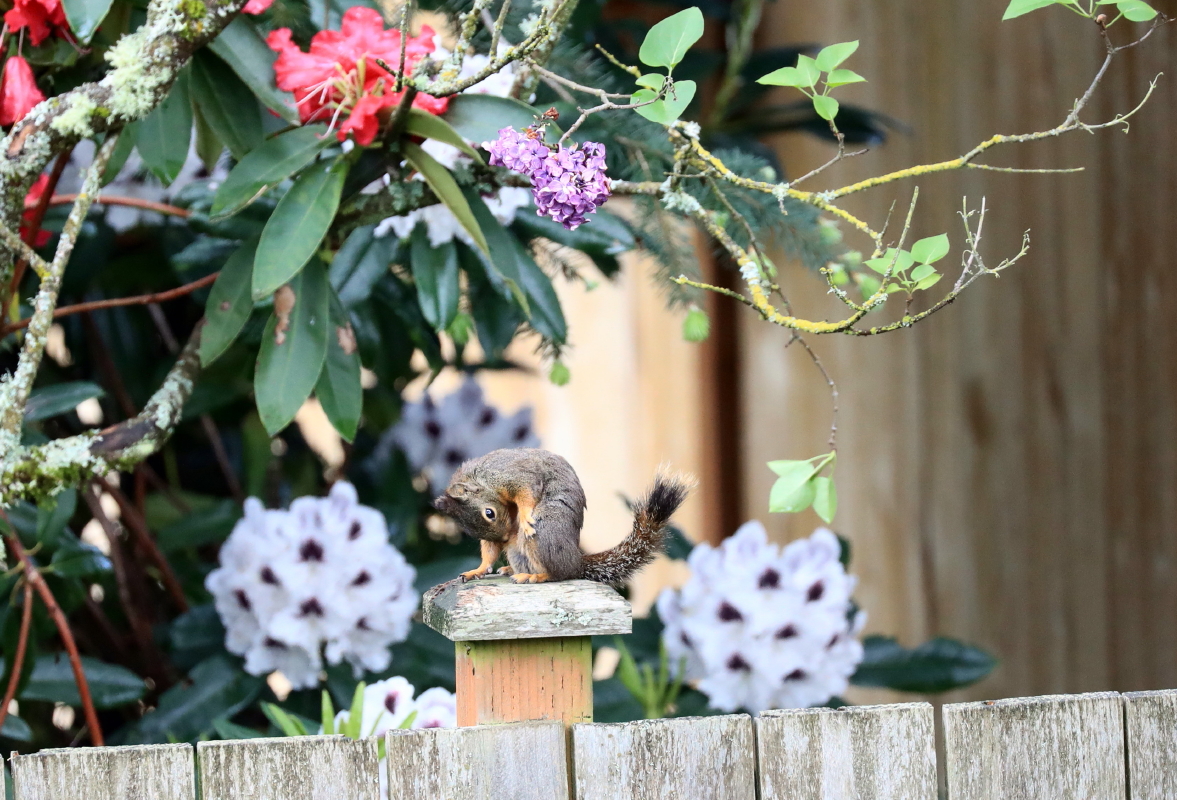