Hello everybody, I didn't want to poach onto a regional website, but photography is universal in my book! My experience with the hobby was virtually non-existent until around three years ago I became interested in astrophotography. Prior to that my camera equipment consisted of a Canon point and shoot and I always in auto mode. However, at the time I was interested in visual astronomy and possessed a smaller telescope and a solar telescope as well. What changed was one day I decided to take some shots of the sun by simply holding the camera up to the eyepiece and clicking the shutter. That was the beginning of my interest in astrophotography, a hobby beset by a deep learning curve and in my case bad luck, but that is too long a story to bore you all with.

I first met Bill through a Ducati motorcycle website and learned we had some things in common. I also found out he was a prolific photographer of birds and over time through mostly his work, I became more and more interested in bird species and their behavior. I was fascinated by Bill's chronicling of every day bird behavior and especially his work following breeding pairs of Bald Eagles. He captures the natural world of birds and I even placed a few of his shots on my desktop.

Last year I dovetailed a business trip up to the Seattle area and met up with Bill at the Marsh near his home and he also took me to a spot where he would take pictures of a Bald Eagle nest that was located in a residential neighborhood. What struck me was the scale of the distances from where Bill would typically take his photos and compare that to what you saw after he posted them. With the unaided eye, the nest looked like it was a half mile away, a speck, but that was completely reversed through his camera lens, it was like watching them from ten feet away, amazing perspective.

Bill was kind enough to extend pointers my way as I became more interested in "daytime" photography and also birding. Now I'm hooked and this side interest gives me something else to do related to photography and I don't have to stay up all night either.

I'm looking forward to learning more about wildlife photography and enjoying the many wonderful photos that are posted here. Thank you, John Shutz

Just for fun, here is the result of a series of long exposures I took of the Lagoon Nebula last year. I used a Canon 60Da DSLR, it is a camera Canon purposely modified the sensor at the factory to allow more of the Ha wavelength to hit the sensor. The "a" in Da signifies "astronomy". The most common color of deep sky nebulas in the Ha wavelength is red. 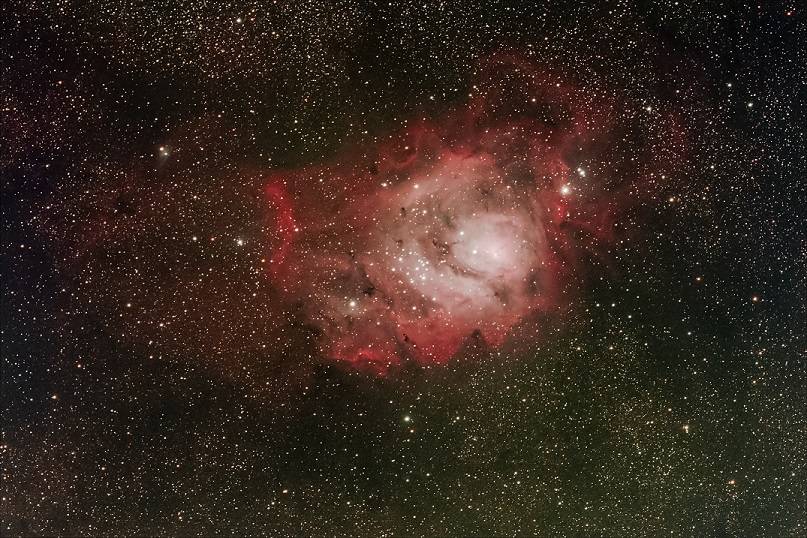 Staff member
Welcome to the forum John. Since it's pretty obvious it's not a coincidence, I'll admit you're the reason I posted the "About that Pacific Northwest bit" topic. We welcome photographers from all over the world. Anyone is welcome to participate and join in. The vast majority of members are in the Northwest and the majority of photos are from there too, but, as you put it so well "Photography is Universal".

So, you are more than welcome, and we're glad you're here! Tell your photographer friends too.

As for the astronomy photos, well, the night sky does look a bit different in Seattle. If you google "What's the worst place to do astronomy?" I suspect Seattle would rank high. If it's not clouds, it's rampant light pollution. Fortunately, if you drive an hour or two, you can find some nice dark sky.

Your timing is excellent, I just added this topic during our recent upgrades.
Night Photos, Dark Sky and Astrophotography
http://www.pnwphotos.com/forum/index.php?forums/night-photos-dark-sky-and-astrophotography.80/

All brand new, lots of space (space is important for Astrophotography, right?<grin>) and ready to see more of your photos. If the one you posted above is any indication, and I'm sure it is, we're in for a real treat!
Last edited: Apr 11, 2018

Staff member
Welcome, John. I'm looking forward to your "out of this world" photos and your bird photos as well.
You must log in or register to reply here.
Share:
Facebook Twitter Reddit Pinterest Tumblr WhatsApp Email Link
Affiliate Disclosure: We may receive a commision from some of the links and ads shown on this website (Learn More Here)