Staff member
In a reply to one of my eagles, Bill mentioned motion blur, and whether not people want to include it.

I have a general rule for any kind of a "Special Effect". That is "If you use an effect, it should be obvious that it was intentional"

A typical example would be shooting on an angle. A slight tilt? Looks like you didn't set up the tripod correctly. A strong noticeable tilt? OH, you're going for the "Batman Look", that's cool!

I have tried for motion blur with eagles, but haven't had much success. This one is close, but it bothers me. The problem is that his head is soft, likely due to moving it as he lands. The body and claws are sharp, so I tracked him OK. It's not too bad, but I'm not a huge fan of it either.

I tried a reasonable amount of these but the number of keepers was so low that I went back to just trying to get them tack sharp. Also, it requires some pretty specific circumstances. The eagle must be gliding, any wing motion will ruin the effect. There has to be a background to show the motion blur. Do this on a blue sky? You have nothing. So it's not something that's very useful. 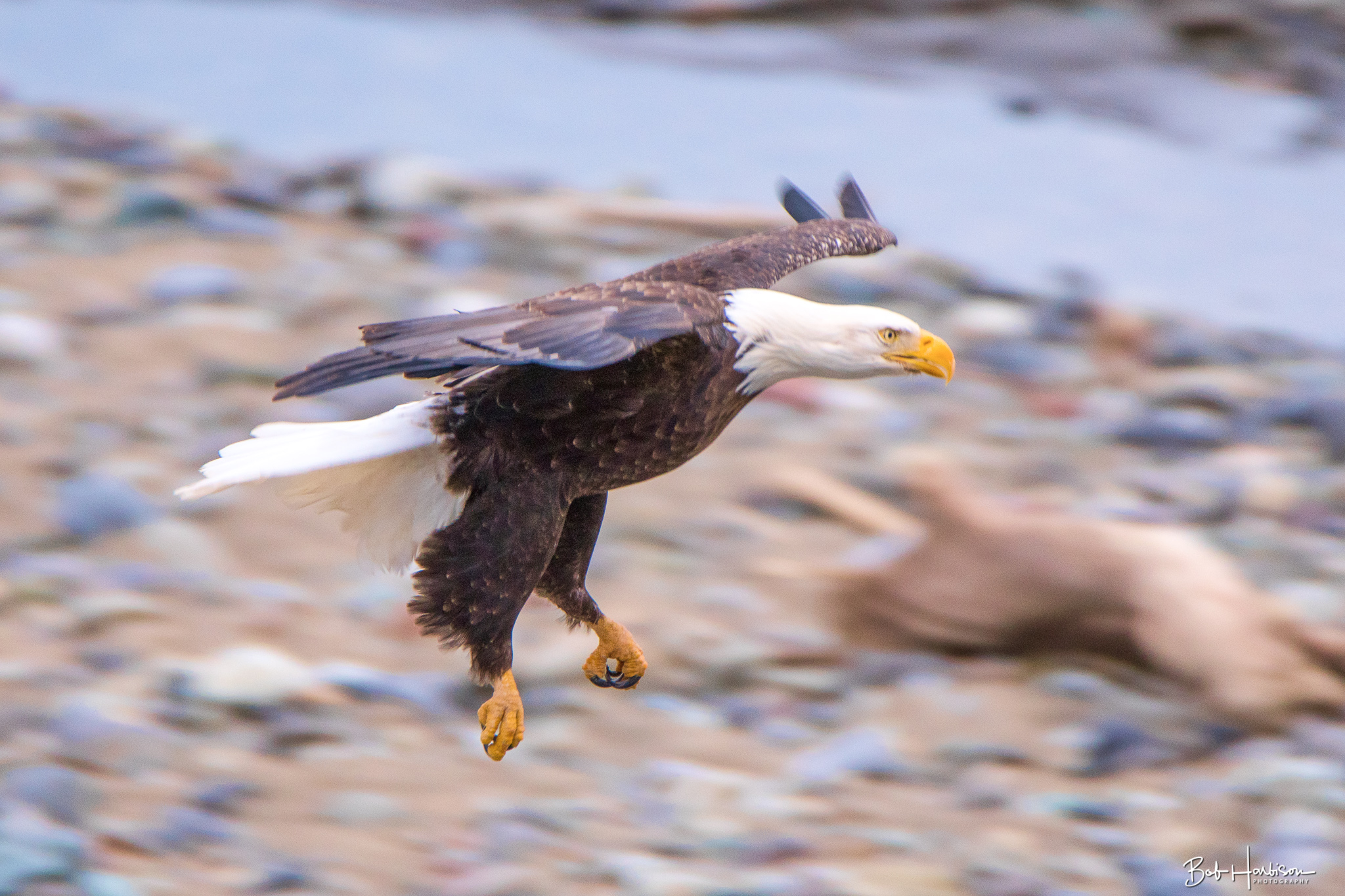 Staff member
So, I'm not a fan of motion blur on birds. They're not predictable and the setup needed is tricky.

What we really need is a subject that's predictable and smooth. No flapping wings or jerky motion. We need something that rides like it's on rails...

Hmm... I think I know what would work. 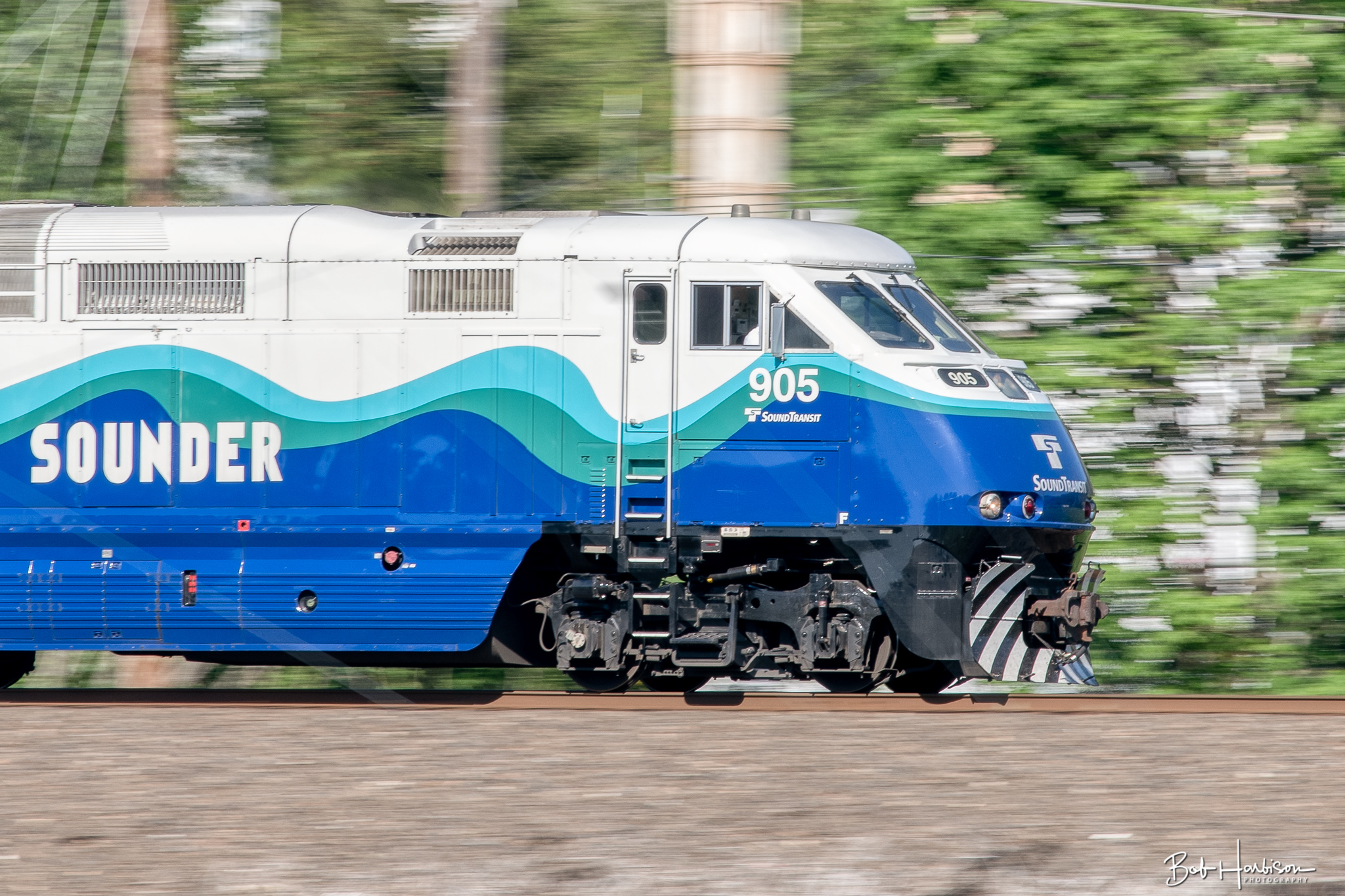 So the trick here is to make it obvious the background blur was intended. Not just subtle, but quite clearly not clear. It leaves no doubt this train is moving fast.

Staff member
Want to practice this technique? Well, it could be a bit tricky right now, but I like to find some bike riders and track them. I usually spend an hour or two photographing the Seattle to Portland Bike Classic (they're adamant it's not a race). Of course that's cancelled this year along with everything else.

A couple things to notice here:

If there's more than one bike, usually only one will be sharp. Even the slightest difference in speed will make a blur.

Notice that the rider's legs are often blurred, even when the rest of them is sharp. That's because they're moving at a different rate and/or in a different direction.

Some of these are nearly perfect, others have slight blur. The first one for example, the rider's head is sharp, but the lettering on the bike was soft. I was tracking his upper body, guessing he leaned forward or back slightly?

This wasn't easy, I had far more duds than keepers. It was fun though and a good way to learn! 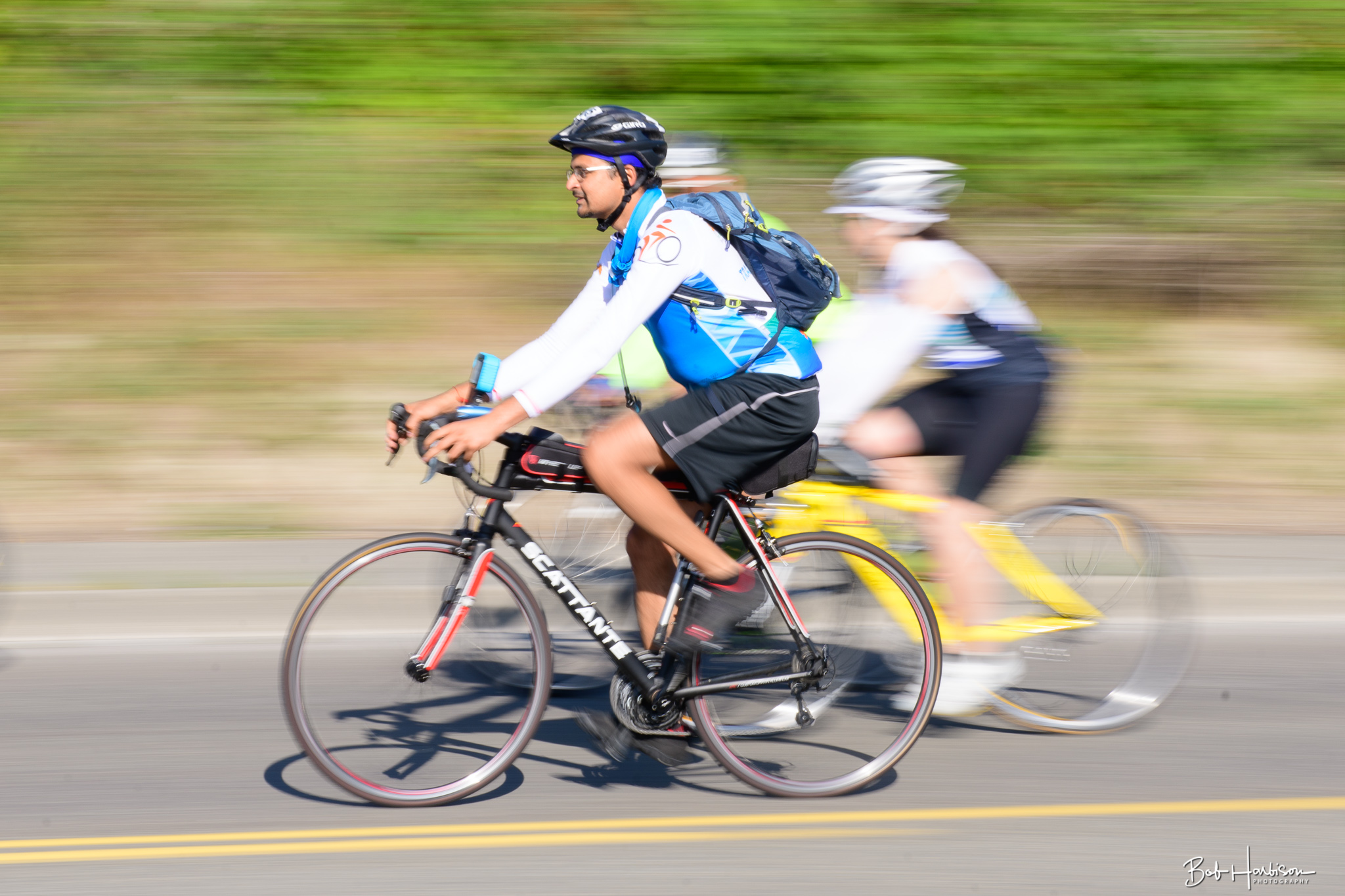 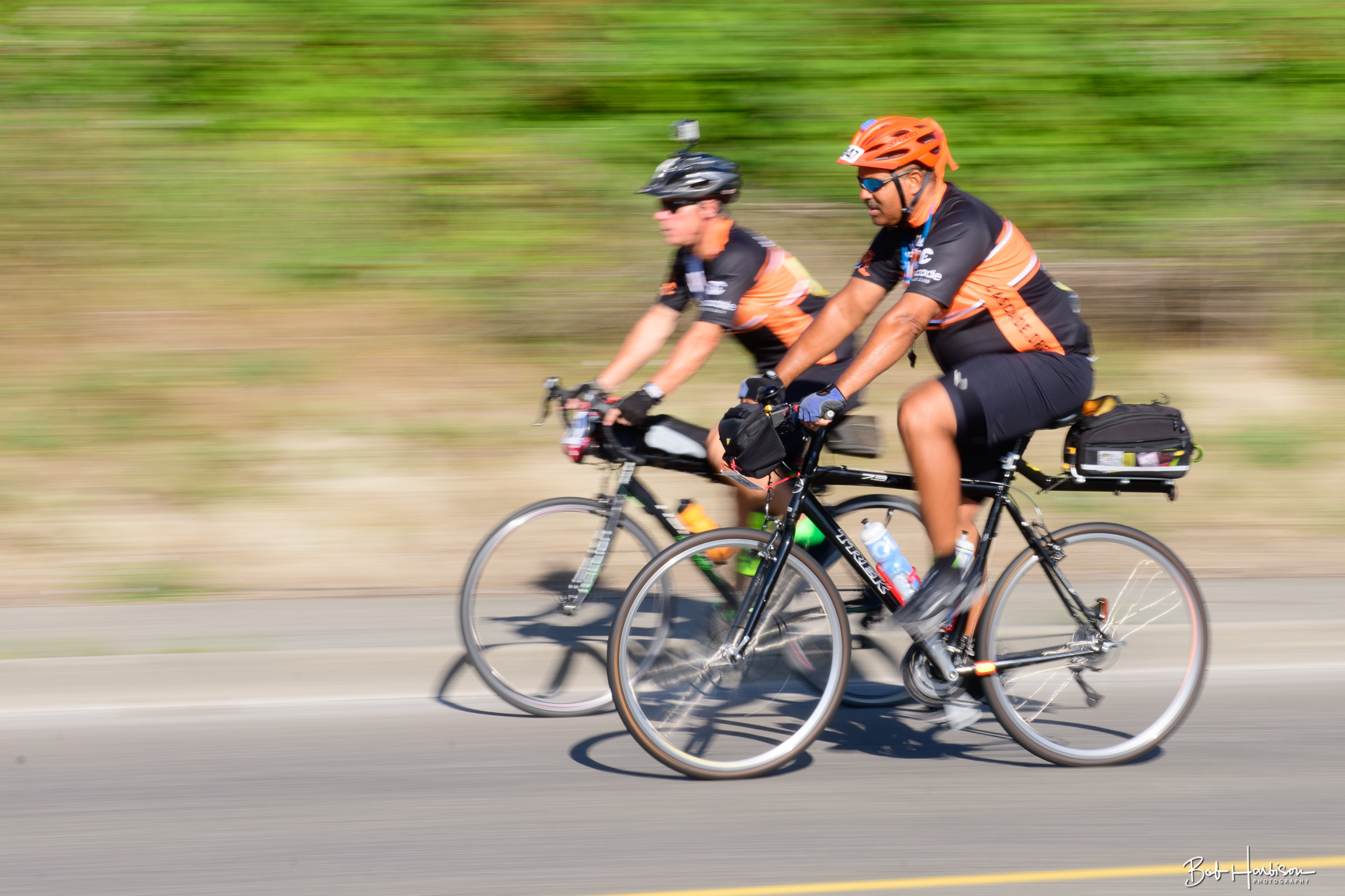 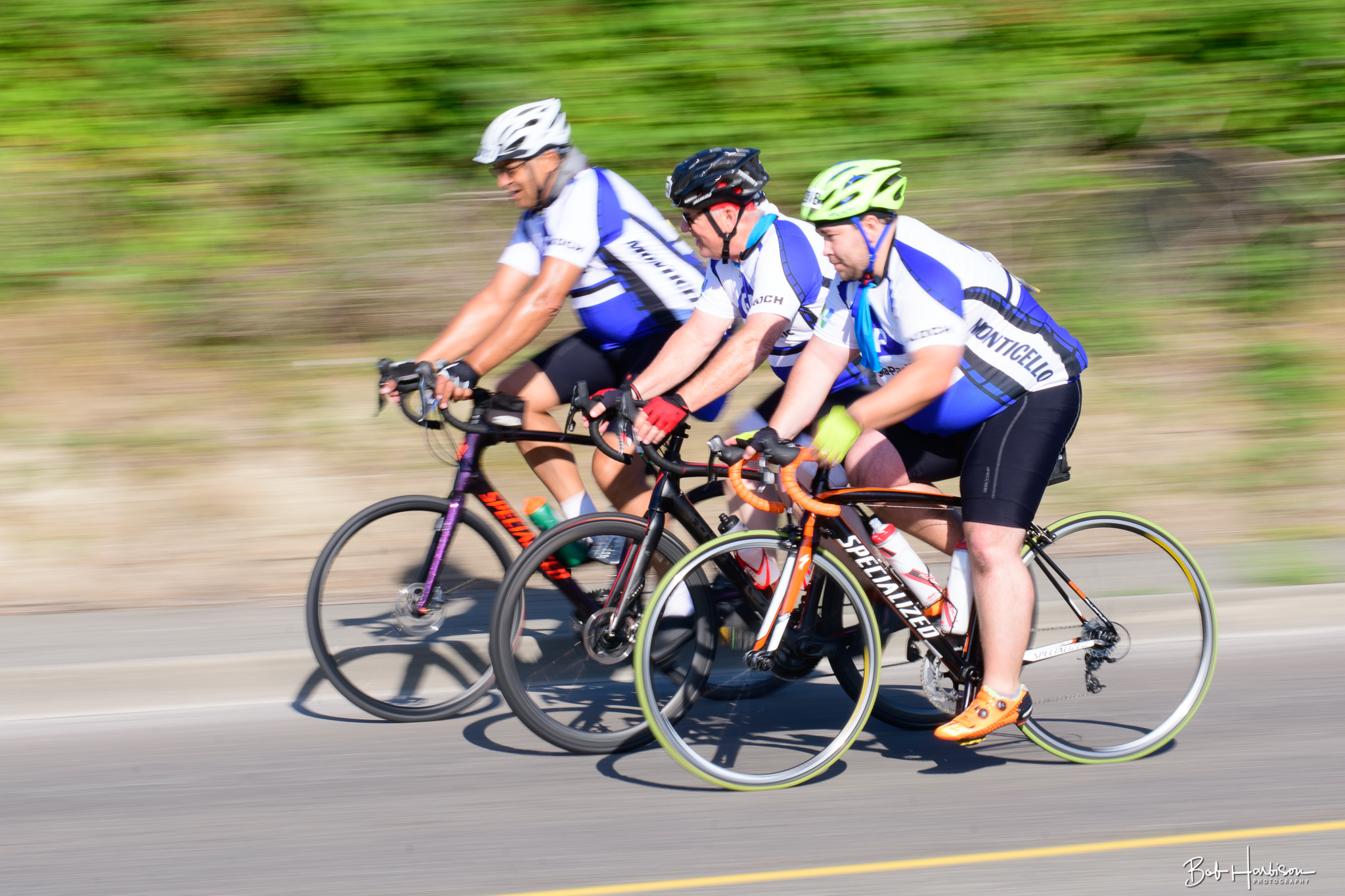 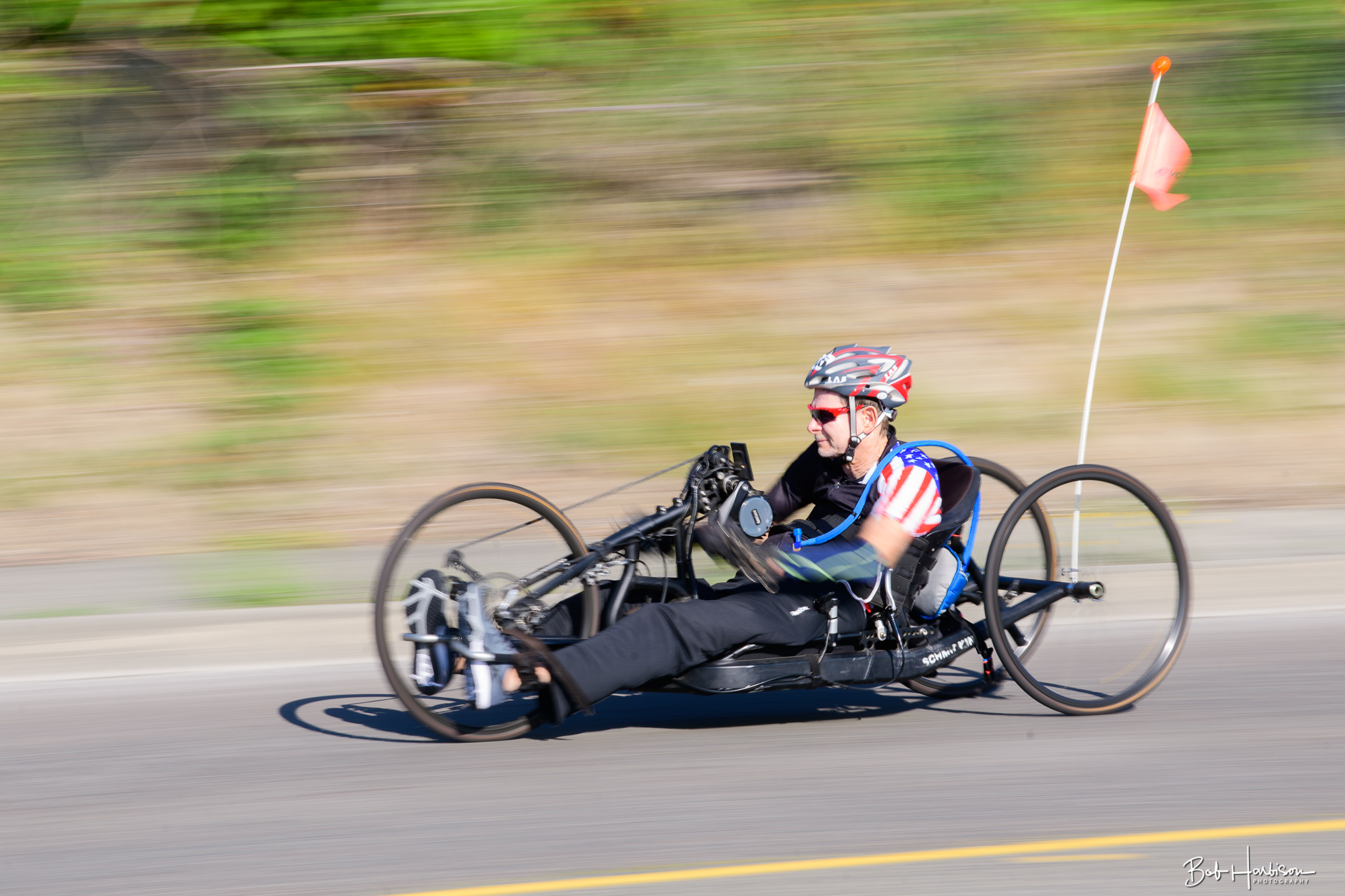 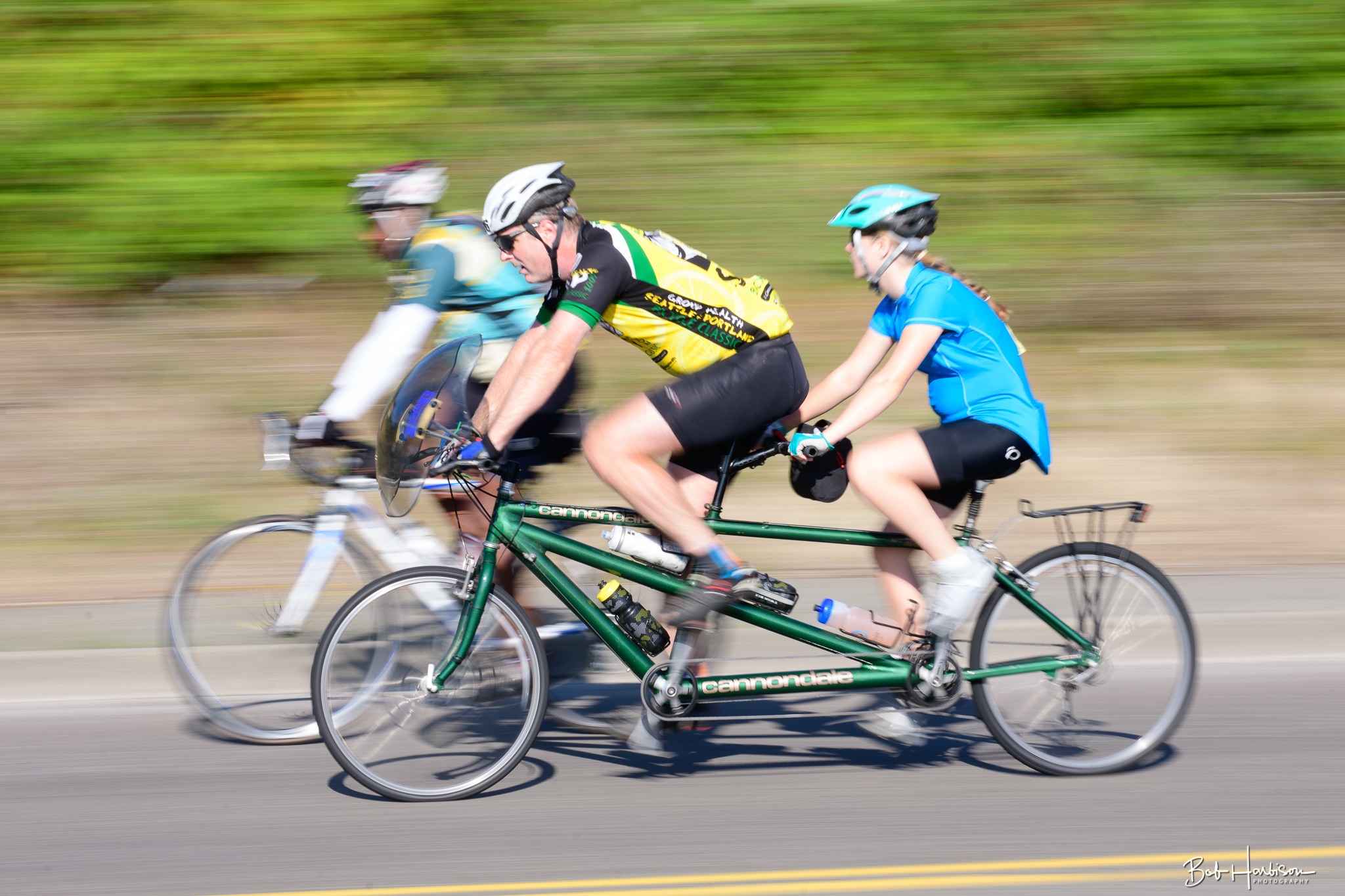 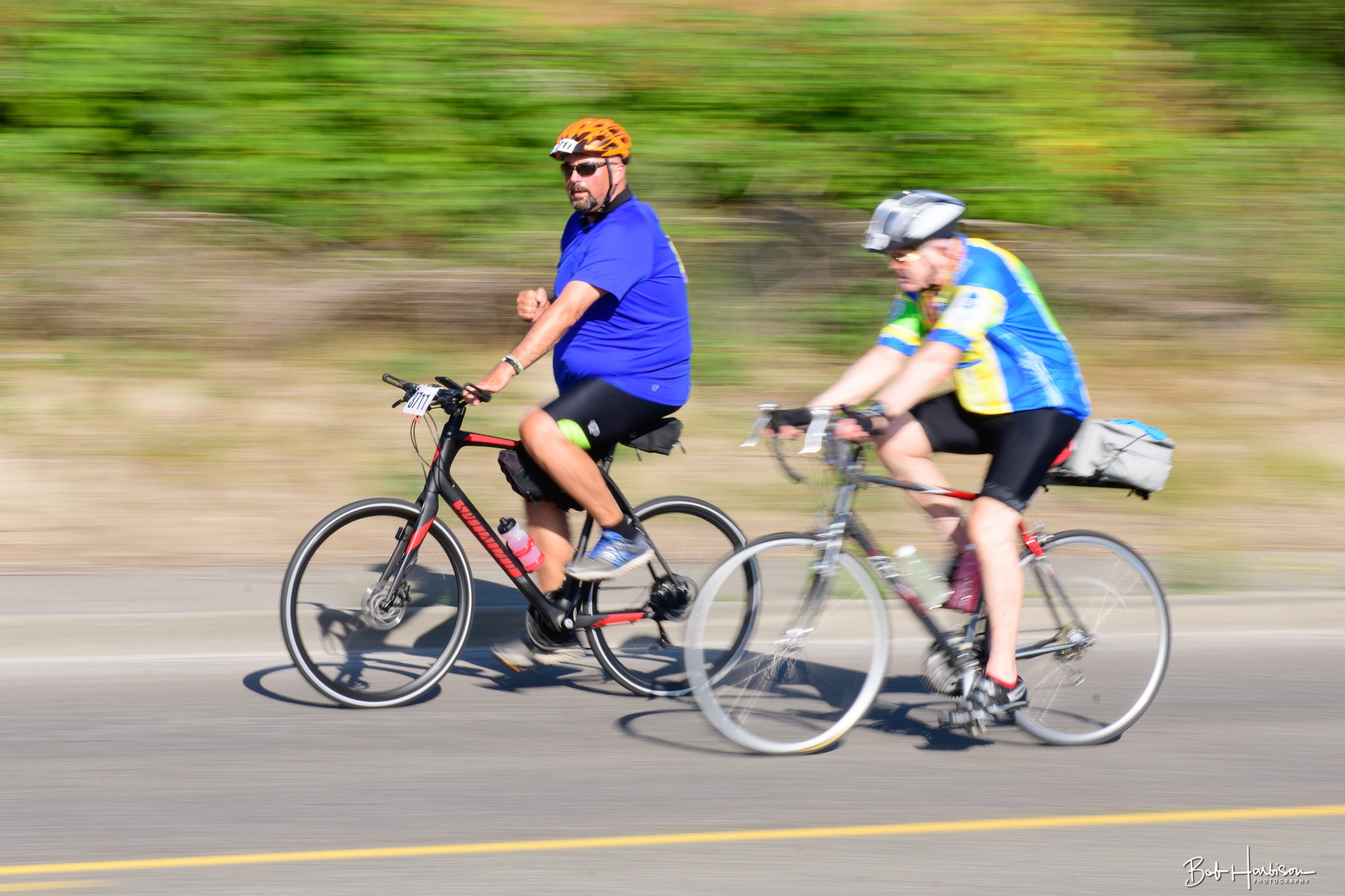 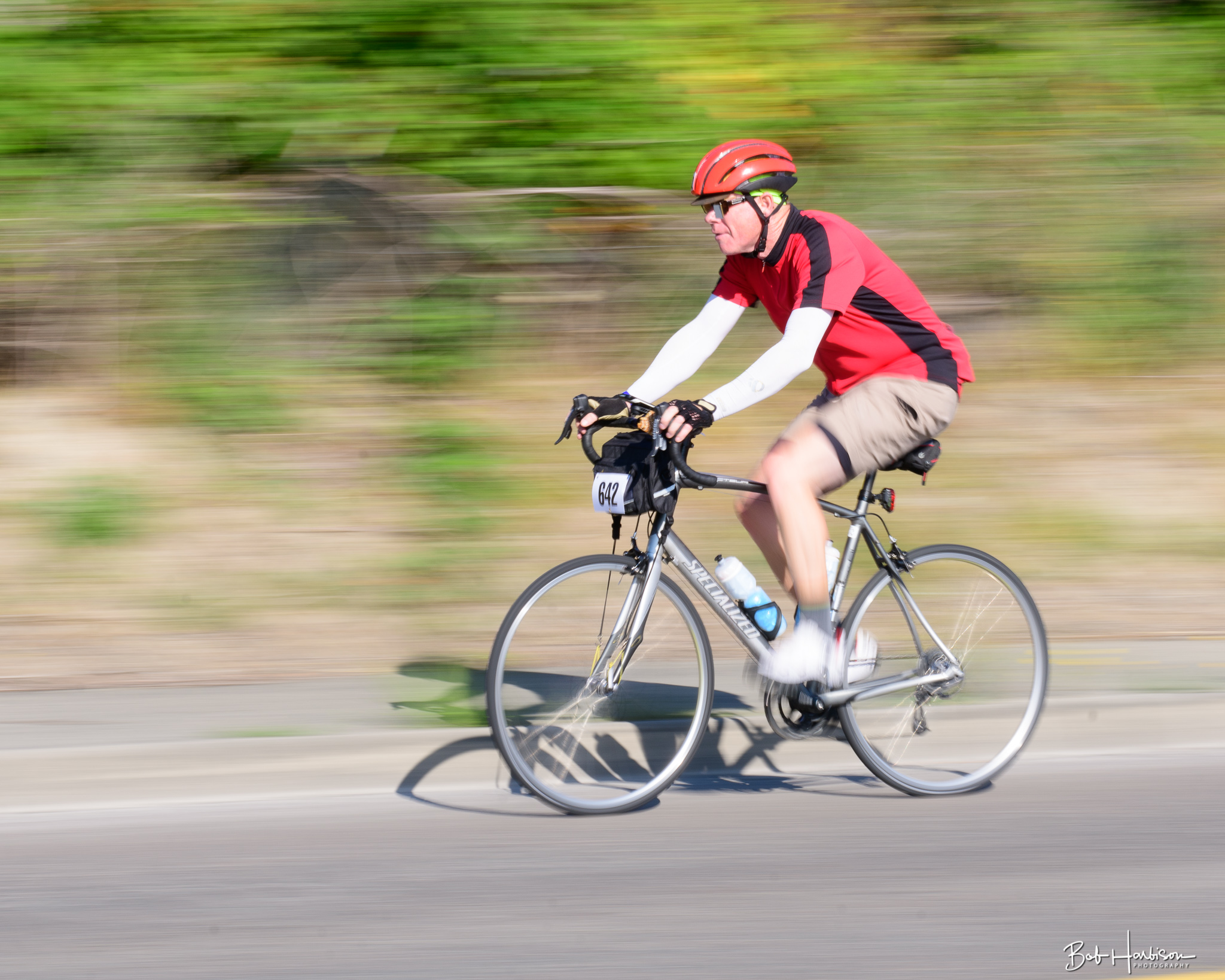 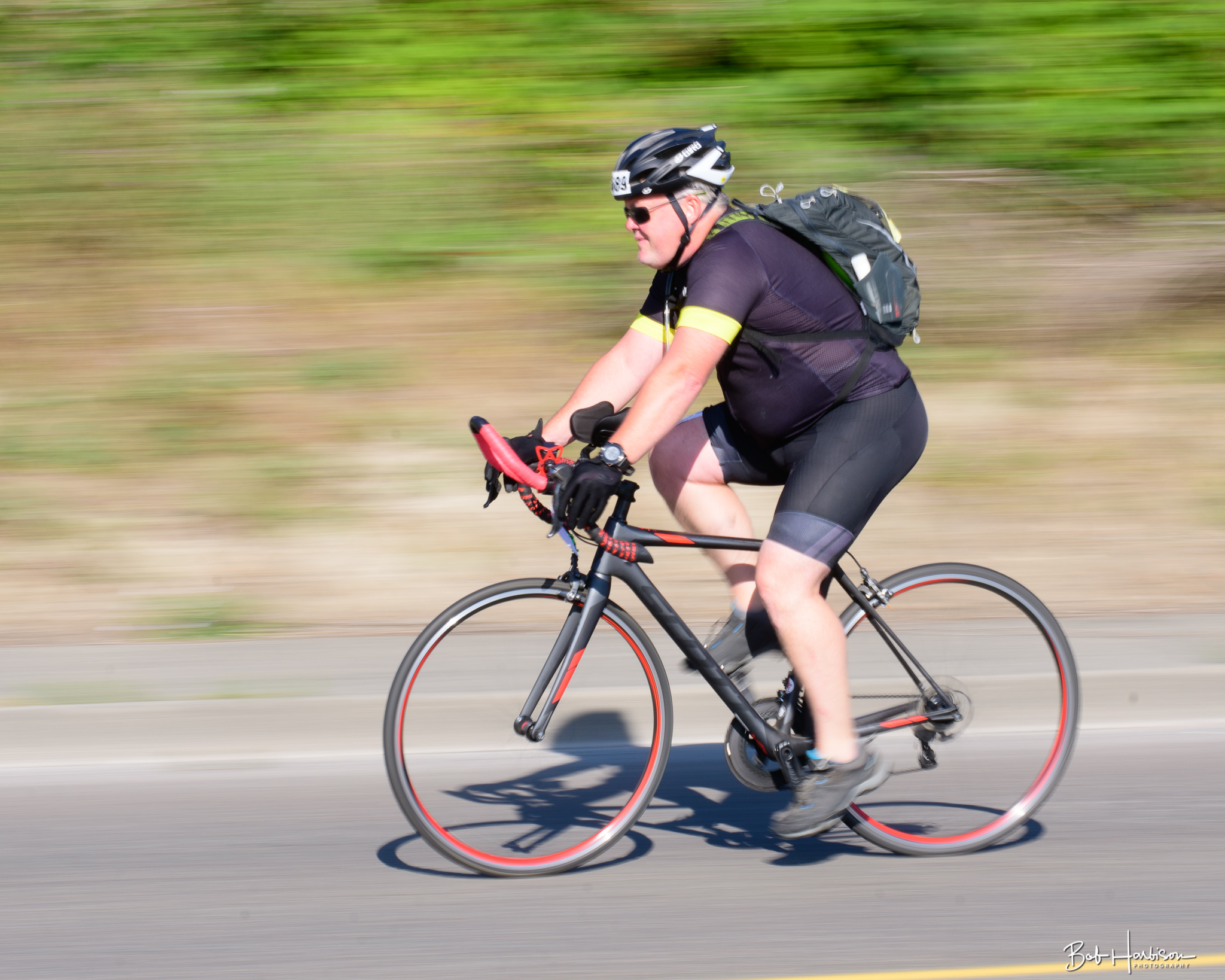 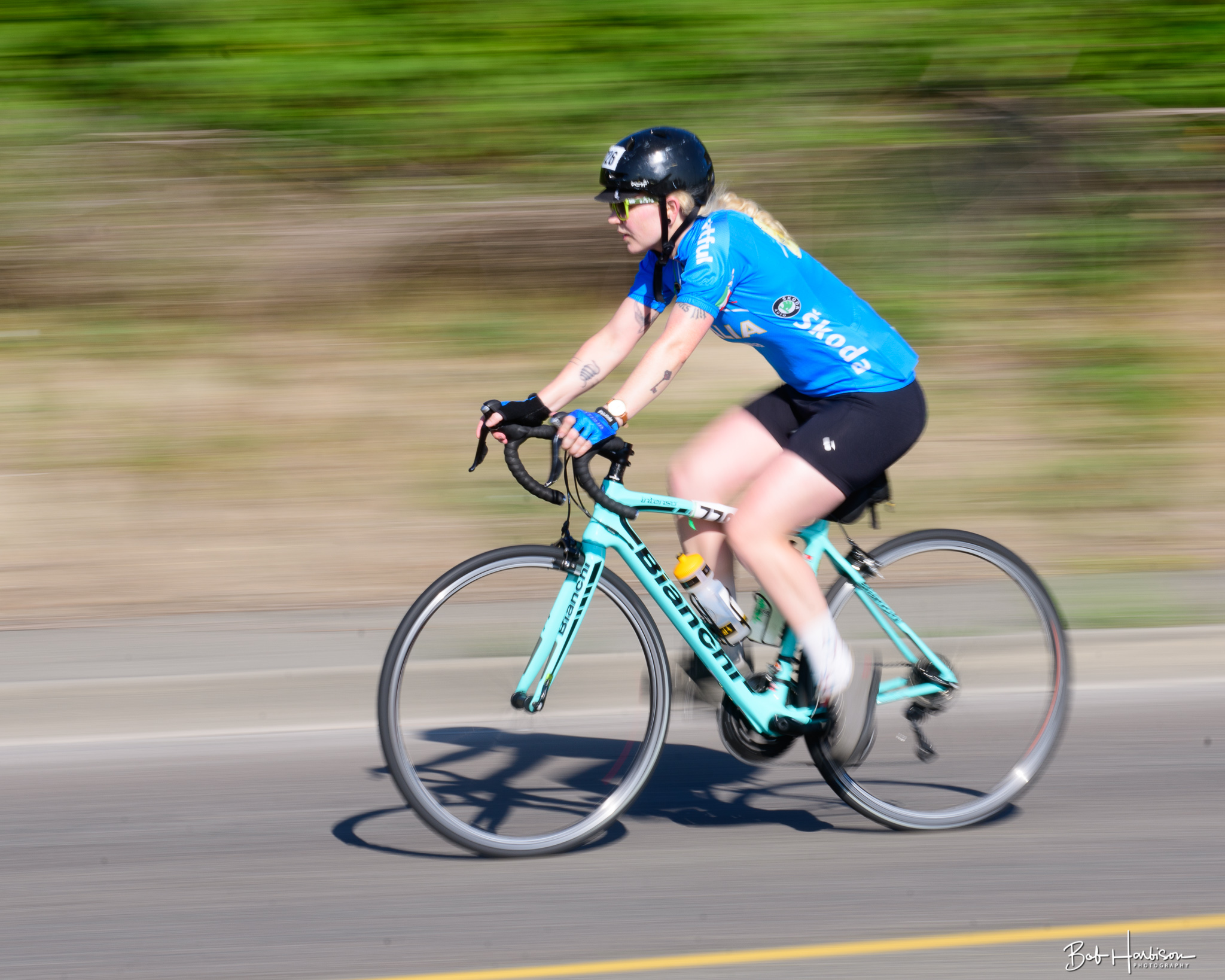 Staff member
Nailed it... Out of hundreds of photos, only a few came out really good. This three are favorites of mine. 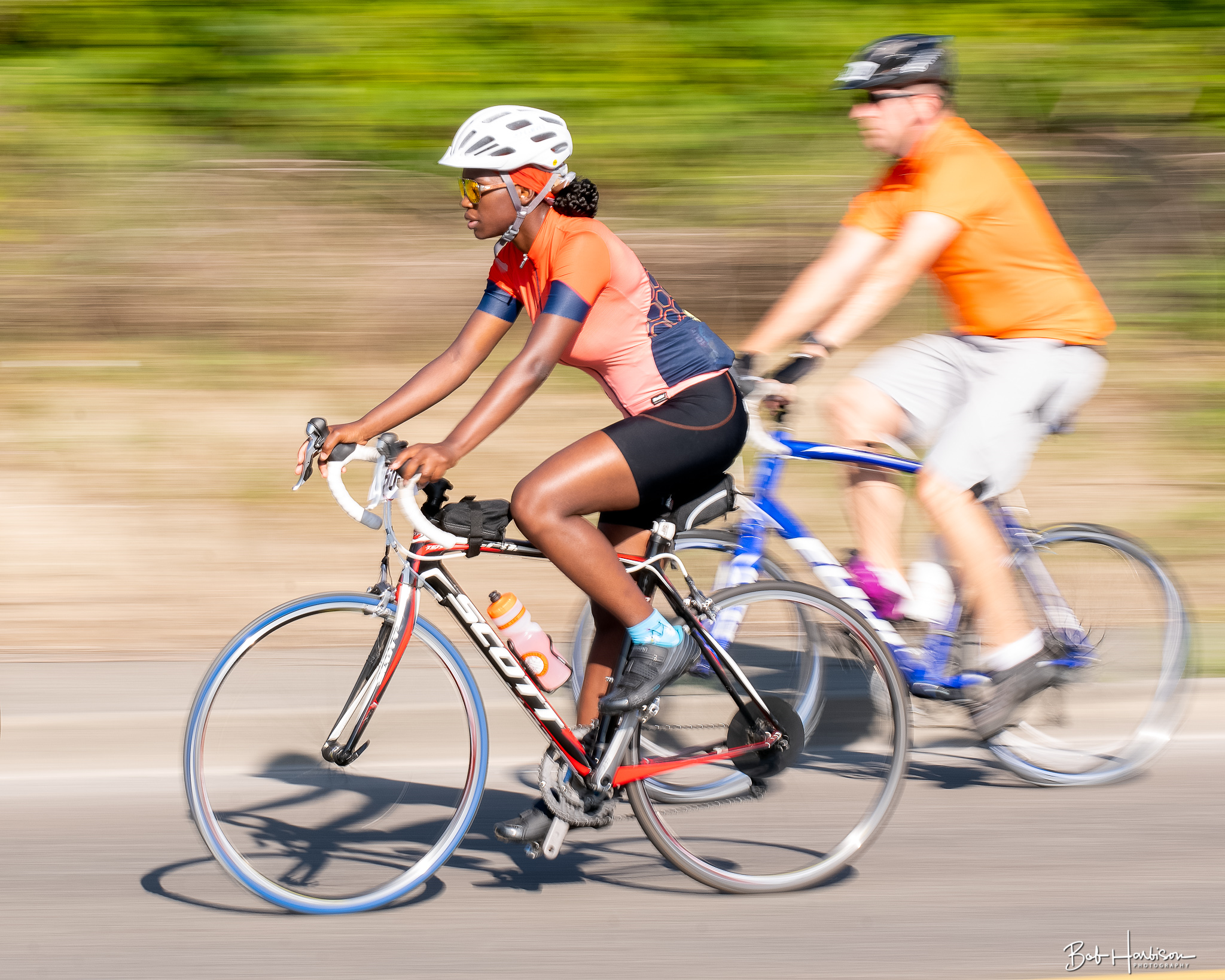 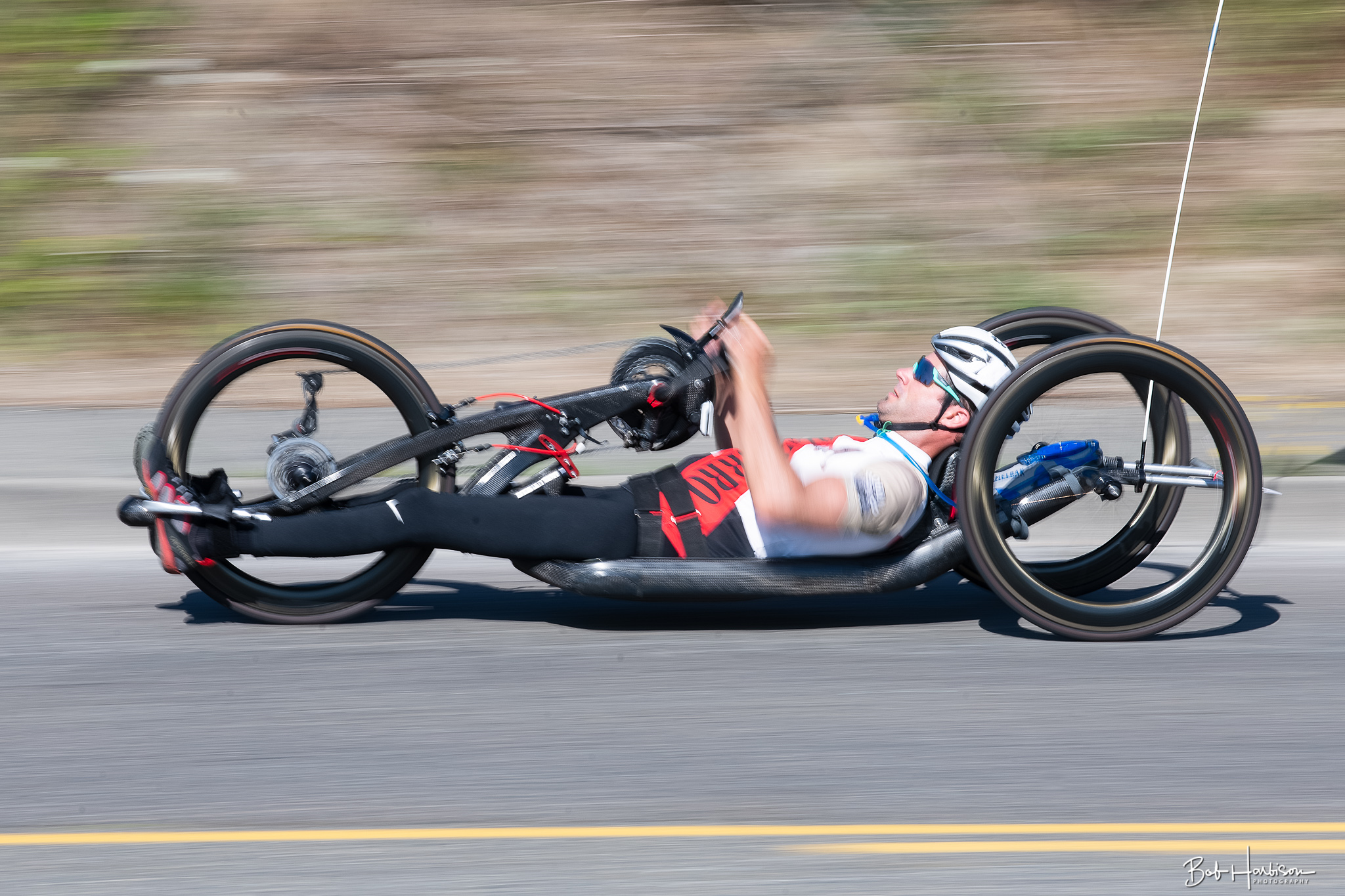 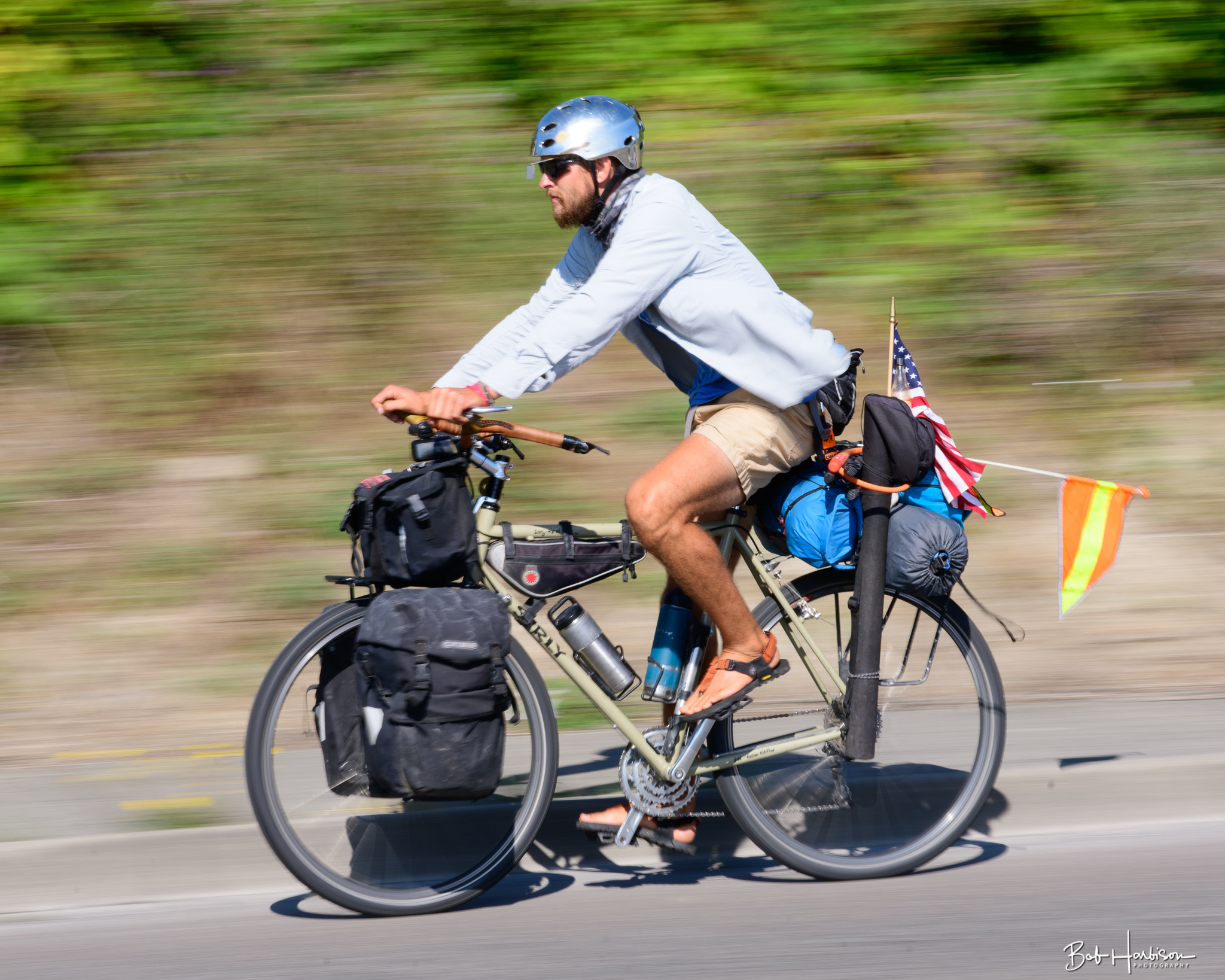 Staff member
We used to call photos like the train photo "pan" shots. Is that term still used?

Bill Anderson said:
We used to call photos like the train photo "pan" shots. Is that term still used?
Click to expand...

Yes, it's still called "panning" and they're all done with the same technique, the train and the bikes.

Basically you move the camera to track the subject. The tricky bit is that if you swing it in an arc, as your natural inclination is to do, the edges will get soft as the motion changes the focal plane relative to the object.

The best technique is to move the camera parallel to the subject rather than in a arc.
R

Photographing Birds in flight against either a blue sky or cloudy. How I practice this. I find a place with lots of ducks. Like Smith Island. Why ducks. Most of the time they fly in a straight line, and the challenge is, they are very fast. You only have a few seconds to find, lock focus and get a few pictures. At least with Canon cameras. The pro and semi pro cameras. The AF points in AI servo, All points active. You can set any one point to serve as your focus lock. And then the AF will track the bird from there. My 7DII has been fantastic camera for this. Hand holding this beast with the Tamron 150-600 can be a challenge.

Staff member
There have recently been swallows flying around my neighborhood for the first time that I can remember. I wonder if they are nesting at a nearby elementary school which is closed due to the Covid-19 shutdown.

I have been using the swallows to practice BIF shots from my back deck using the same settings as Ricky. I have not used the full screen, all points active AF setting very often in the past, so it will be interesting to see how it works out. I use my 1DxII + 100-400L II telephoto zoom, which is smaller than Ricky's Tamron 150-600. I cannot imagine hand holding that for very long.
You must log in or register to reply here.
Share:
Facebook Twitter Reddit Pinterest Tumblr WhatsApp Email Link
Affiliate Disclosure: We may receive a commision from some of the links and ads shown on this website (Learn More Here)