Black scoters, surf scoters, and a single common murre can be seen in this photo.

Several Bonaparte's gulls were flying around the underwater dive park. One rather large flock flew in from the north and landed out in the Sound.

I wonder if these were the mystery birds I asked about earlier this week.

Staff member
The parasitic Jaeger was off Sunset Ave. again Monday (9/25/17) around noon. I accidentally got some photos of it as I was shooting the flocks of Bonaparte's gulls. 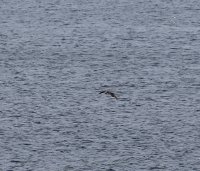 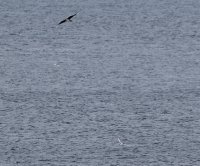 Staff member
Around noon Wednesday (9/27) a single cackling single goose was present among the Canada geese at Mini Park/Sprague Pond in Lynnwood.

Although the cackling goose bears superficial resemblance to the Canada goose, it is about 1/3 the size. Its size can be seen in comparison to these crows...

Its bill is much shorter than that of the Canada goose, as seen in this photo. 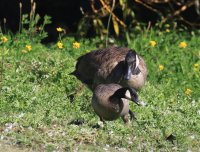 Savannah sparrows on the jetty at Brackett's Landing. 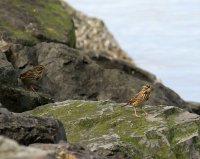 Two long-billed dowitchers were among a group of Killdeer at the marsh. I didn't notice the dowitchers until I looked at the photos on my computer. 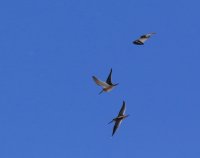 Staff member
A common murre was bathing itself by the fishing pier on Saturday, the last day of September.

The murre would roll over on its back like a dog or cat.

Staff member
Earlier this week I purchased a used Canon 1Dx from Kenmore Camera. I have wanted one ever since the model was released, but I could not afford/justify/rationalize (pick one) spending $6500+ on a new one. My 1Dx was one of two that were traded in by the Seattle Times and put up for sale at a price I could afford.

One of my primary reasons for wanting a 1Dx is for low light photography when shooting owls and other birds under the thick tree canopies of some of our city parks. I put the camera to the test Thursday (10/5) when my son and I went owl hunting at Pine Ridge Park. It was fairly dark in the park. Except where noted, these photos were all taken in jpeg at 1/500, f/8, and auto ISO with minimal processing (crop + auto-adjust) using the 100-400L II telephoto zoom. The ISO settings are posted above each photo.

While we failed to find Aurora, the resident barred owl, we came up big on woodpeckers. A red-breasted sapsucker and a flicker led off a three woodpecker afternoon.

Staff member
The big show was put on by the pileated woodpeckers. We were surrounded by four or five different birds working the ground and trees. I suspect they are the same two adults and three juvies that we photographed in their nearby burrow last summer before the juvies fledged.

ISO = 51200 This shot is heavily cropped. I wanted to capture the woodpecker's tongue and see how the "noisy" photo would turn out under a worse case scenario of high ISO + close crop.

Several times we saw two birds working the same tree. I'll have to research the territorial behavior of pileated woodpeckers, as I am curious if the juvies will remain in the park.
f/5.6, ISO = 3200 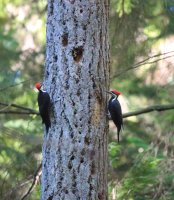 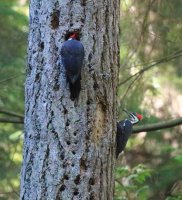 Staff member
The juvie Cooper's(?) hawk continues to hang out at the marsh. It was perched on the old martin gourd hanger in front of the #2 viewing platform when I arrived Friday afternoon (10/6). I had the 1Dx + 100-400L II telephoto zoom in hand and knew it would take off if I returned to the car for my super telephoto package. The hawk stayed on its perch for several minutes, then flew to a tree near the #3 viewing platform.

I flew to the pickup to get the 5DIII + 500L telephoto + 1.4X and tripod. The hawk accommodated me and spent several minutes in the tree. I remained at the #2 platform with the super telephoto package.

The hawk flew to the swallow box near the #3 platform, sat there for a few minutes, and swooped down to the ground.

Staff member
The hawk returned to the swallow box (missed that sequence), then flew to one of the dead trees bordering Willow Creek on the far south side of the marsh. 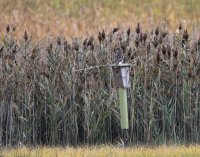 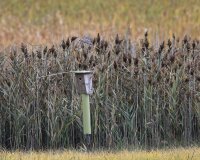 Wishing I had a $uper, $uper telephoto package. Some will point out that the hawk probably looks the same from a distance as it does when perched nearby at the old martin gourd stand.

The hawk is relatively easy to photograph as it will remain perched in one spot for several minutes. When you arrive at the marsh, check the old martin gourd stand first, as it does not mind being that close to people. Like many other raptors, it will often give you a heads up before it takes off by letting out a poop.
Last edited: Oct 7, 2017

Staff member
Three sandpipers were at the marsh Sunday (10/8) shortly before sunset. Photographing them with the horizontal rays of the low sun was tricky, but still better than fighting the heat waves and glare of mid day.

One sandpiper looked like a mini-me version of the other two. All three had yellow legs, so I believe the smaller one was a least and the larger two were pectorals. I tried to get some side-by-side shots for size comparisons.

These are the closest shots I could get using the 7DII + 500L telephoto + 1.4x TC mounted on a tripod at the #1 viewing platform. A sharp-tailed sandpiper, the look-alike Asian cousin of the pectoral and a rare visitor to our area, was recently been spotted in the Puget Sound region.

I wish I could chalk up another rare bird sighting this year, but believe the two I photographed are pectorals.

Staff member
So far I have received one vote for the sharp-tailed sandpiper, a rare visitor from Asia according to Sibley's.

Bill Anderson said:
So far I have received one vote for the sharp-tailed sandpiper, a rare visitor from Asia according to Sibley's.
Click to expand...

In light of the possibility of these being rare birds for our area, I am posting some more photos.

Bill Anderson said:
So far I have received one vote for the sharp-tailed sandpiper, a rare visitor from Asia according to Sibley's.
Click to expand...

Several more votes are in for sharp-tailed sandpipers.

Staff member
No sandpipers today, but I did get some grab shots of a merlin being chased by gulls around the jetty and beach at Brackett's Landing north of the ferry dock. 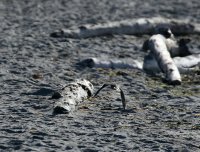 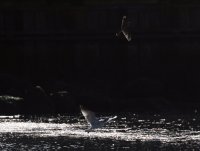 Staff member
Breaking news: I can add a new backyard bird to my list. This morning (10/12/17) my wife discovered a barred owl sleeping on a tree branch in our back yard. It may be one that I have photographed in Pine Ridge Park, which borders the end of our court. My last two owl hunts in Pine Ridge Park came up empty, so maybe the owl came to me for a change. I can add the barred owl to the short list list of birds of prey that have visited my back yard. The other two are a Cooper's hawk and a bald eagle.

From the back deck.

The crows are going nuts, but the owl just keeps sleeping away.

Ironically, the owl is perched on one of the two dying western hemlocks that will be removed next month. I am having 12-15 foot stumps kept in place to serve as habitat for woodpeckers and other birds.
Last edited: Oct 12, 2017

Staff member
Back to our regularly scheduled bird photos. Tuesday (10/10/17), which happens to be Taiwan's national day, proved very productive.

First off was a pair of varied thrushes, my first of the season, in Pine Ridge Park.

There were several reports on Tweeters of snow geese flying over Seattle. This flock was flying south over the marsh.

Great blue heron at the south side of the marsh.

Staff member
The juvie Cooper's hawk made several passes over the marsh. 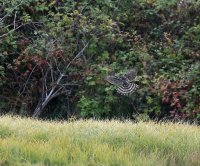