Staff member
From the fishing pier I went to the marsh to look for the snipes. A few minutes later the ducks all flew up out of the water, which signaled the arrival of the eagle.

The eagle bathed in Willow Creek for several minutes.

It flew up to a tree above the creek to dry off. I took the opportunity to take an artsy/surreal/etherial shot using the bare trees as a background.

It later flew up to the spar on the fish hatchery grounds where I have previously photographed the pair drying out.

It goes without saying that the action started after you left Daren and me at the fish hatchery.

Staff member
Monday afternoon (12/22/14) I noticed something out of place as I drove up Pine St. A juvie was sitting on top of a pole below one of the family trees of the Pt. Edwards eagles. I parked the car on Pine St. in front of the condos and crossed the street to the vacant lot where they want to build another condo building.

It was dark and overcast, so I really had to crank up the exposure compensation. The juvie sat there for a few minutes..........

The reason for its departure was the arrival of one of the Pt. Edwards adults, which perched on another of the family trees. It was not happy to see another eagle in its territory, even if it might be one of its own progeny.

The juvie flew around and headed south, as did the adult.

A second adult was perched in the sentry tree near the nest. I wonder if mating/nesting season is close at hand with the adults hanging out closer to the nest.

Great job in difficult (no) light!

Staff member
Tuesday (12/23/14) afternoon I went to Marina Park before the rainstorm hit Edmonds. I noticed one of the Pt. Edwards eagles perched in a tree on the bluff above the railroad tracks opposite the off leash dog beach. I entered the dog park, but the eagle took off before I got under the tree.

The eagle flew to its usual perch on the piling off Marina Park. I had never taken photos of this perch from the vantage of the off leash dog beach, so I did not leave. The wind increased as the storm blew in and the eagle kept adjusting its balance.

The eagle's stubborn refusal to leave gave me the opportunity to take some minimal chromatic, artsy shots of it with a background of the Edmonds-Kingston ferry and a stormy Puget Sound. The ability of the 5DIII to handle high ISO settings without noise let me use some very small aperature openings to avoid depth of field problems and keep everything in focus.

The eagle finally had enough discomfort from the wind and took off south. It circled off the dog beach where some ducks had been swimming.

I though it might make a dive for one of the ducks, but it continued flying south around Pt. Edwards.
Last edited: Dec 24, 2014

Staff member
Thursday afternoon (1/8/15) a juvie flew over Brackett's Landing North and frightened the Brant which were on the beach.

My son and I checked out the pilings off the Senior Center where the Pt. Edwards pair like to perch. Both adults were on the pilings. One took off before I could get my 500L telephoto lens set up, but I captured its immediate return with the 5DIII + 100-400L zoom.

Staff member
Both eagles looked as though they were going to be there a while, so I mounted my 5DIII + 500L telephoto + 1.4x teleconverter on a tripod for some shots of the eagles. I don't often shoot at this location, which off the parking lot at the Senior Center and just south of Brackett's Landing South.
http://www.edmondswa.gov/government...monds-city-parks/bracketts-landing-south.html

Good shots, Bill. Saw the eagle there this AM while having breakfast at the senior center.

Staff member
Sunday morning (1/11) I got a call from Janine as I was sitting at home in my TV chair watching the NFL playoff games. She was at Marina Beach and saw a juvie and an adult perched next to each other. I hope Janine posts her photos here. Last year at Marina Beach we photographed juvie (delinquents) trying to steal food from the adults.

Staff member
Wednesday (1/14/15) morning I was driving up Pine St. on Pt. Edwards just as one of the Pt. Edwards eagles landed on the family tree at the top of the hill. Over the past 5-6 years I have taken hundreds (if not thousands) of photos of eagles perched on this tree, but unusual atmospheric conditions presented an opportunity for some unique artistic/surreal/ethereal shots.

The sun was starting to break through the fog bank. I positioned myself at various spots along Pine St. to frame the eagle against the sun.

After the sun broke through, I met Terry on Chinook Rd. uphill of the eagle. I saw a small bird fly quickly around the tree and the eagle. I think it was the Pt. Edwards merlin looking for a place to perch. I had forgotten to remove the 1.4x teleconverter from the 100-400L zoom, so the camera was slow to lock on to the bird. I only got one shot in focus.

A more conventional shot of the eagle from below the tree. I had to shoot at -1 exposure compensation due to the low sun reflecting off the eagle's bright, white feathers. 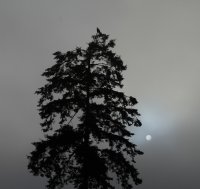 Nice - great unusual conditions thanks to the fog - the sun certainly looks like the moon. Great eye, Bill

My two cents worth on Wednesday - nothing extraordinary, except for the blue sky - but I am excited about being able to use my 1.4x extender on my 400mm f5.6L, thanks to the Canon 5D mark iii. As Bill mentioned, because of the eagle's white head, this was shot at an exposure compensation value of -2/3. 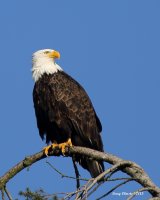 Staff member
Monday (1-19-15) after lunch Terry and I drove past the Willow Creek fish hatchery. We both stopped to photograph one of the Pt. Edwards eagles perched on the top of a tall Doug fir on the fish hatchery grounds.

As we were photographing the eagle, its mate flew over us. All of this happened so quickly that I did not have time to adjust the exposure compensation to keep from over-exposing the eagles' heads.

After the eagle flew by, the one perched on the tree took off while we were not looking. We searched in vain for them at their usual family trees on Pt. Edwards.

Staff member
Saturday (1/24) one of the Pt. Edwards eagles flew in to take a bath in Willow Creek at the south side of the marsh.

While viewing the photos at home on my computer, I discovered I had also captured a swallow flying in the opposite direction.

The eagle spent a few minutes in the creek, then took off and headed south around Pt. Edwards.

Staff member
Sunday (1/25) the eagles were making the rounds of the marina and surrounding environs. One flew in and landed by the creek, but I never saw it depart.

Nice sequences, Bill. Pretty amazing AF on some of those shots with the strong background but with the eagle in focus.
You must log in or register to reply here.
Share:
Facebook Twitter Reddit Pinterest Tumblr WhatsApp Email Link
Affiliate Disclosure: We may receive a commision from some of the links and ads shown on this website (Learn More Here)